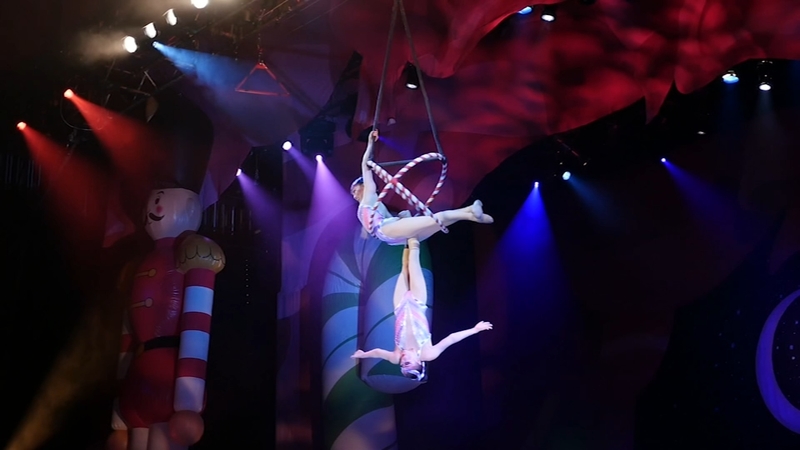 Cirque Dreams Holidaze is turning the season into a high-flying electrifying spectacle.

The show is Broadway Philadelphia's holiday spectacular with about 20 acts on stage.

"(It's) Circus artists from around the world celebrating the holidays," says Fran Egler, The Kimmel Center's Senior Director of Programming.

The show touches on Thanksgiving, Hanukah, Christmas and New Years and all the different ways people celebrate.

"It's not a typical Broadway show, but it's stylized like a Broadway show," says Cirque Dreams Holidaze Founder and Artistic Director Neil Goldberg, "You never know what's going to happen next."

It's an energy-filled 90 minutes.

"The beginning starts with this grandiose celebration of the holiday season," Goldberg says, "It's a wonderland of gift boxes and toy soldiers and candy canes."

The costumes are inspired by ornaments that Goldberg has collected on his travels.

"There are over 300 costumes that 30 artists are constantly changing," Goldberg says. "There's a lot of imagination, a lot of fashion."

The music is a mix of old and new with songs like Deck the Halls and Jingle Bell Rock re-orchestrated.

"And the rest of the score is all original," Goldberg says.

The centerpiece of the show is a 24-foot-tall tree with acrobats and athletes suspended from it.

"The ornaments come off the tree, come to life and every ornament tells its story," Goldberg explains, "There's ornaments today for every holiday."

Each holiday offers a fantastic feat. The New Year's celebration features lots of acrobatics, and Santa's entrance is not quite like you remember.

"It's a Cirque show so he's not just going to come down the chimney," Goldberg says. "We try to bring a smile to everyone's face with very familiar recollections of not just their childhood, but the way that they would celebrate a season."

There are about 25 scenes to dazzle your senses.

"This is sort of the combination of a new Cirque adventure, a Broadway musical and a holiday gift all wrapped in one," Goldberg says, "There's truly something in this for everyone."