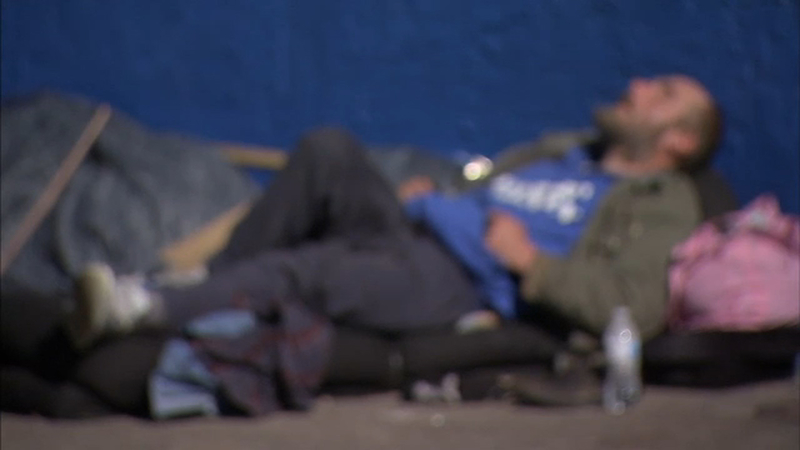 KENSINGTON (WPVI) -- A massive clean-up project is targeting the drug-ravaged areas of Kensington.

But, more importantly, the effort is targeting heroin abuse.

It is the first of its kind effort led by the mayor's office to clean up Kensington.

Philadelphia’s Water Dept cleaned out sewer inlets along Kensington Ave as part of the cleanup effort. It smelled worse than it looks. 🤭 pic.twitter.com/3aYxcDZ8Fx

There are brooms and shovels to help the city look better, but city leaders acknowledge Kensington's problems run far deeper than the surface.

"None of us created this problem, but we're living with it and we need to address it," Kenney said.

Hundreds of city workers and volunteer groups are cleaning streets of needles and trash, clearing out storm inlets and sealing up and painting vacant buildings.

A major cleanup is underway in Kensington. Hundreds of city workers and volunteers are helping to spruce up Kensington Ave which has been hit hard by the heroin epidemic. pic.twitter.com/pkX6GwJVK0

The efforts are fulfilling part of Mayor Jim Kenney's executive order to take back the streets from drug dealers and users, often seen in heroin-induced stupors.

"Children have to walk past people shooting up and it shouldn't be," said Ana Jacobs of Rock Ministries.

Jacobs is part of a ministry to get users to detox. She says the cleanup is needed but so are more beds.

"It's not enough unless we provide help for people to change their lives - and it starts with getting clean. You need a place to go," Jacobs said.

RELATED: More coverage of the drug issues facing our area at 6abc.com/OpioidCrisis

City officials say resources are being spent on recovery efforts, but that long-term residents deserve help in taking back their community from people who come here to do drugs.

"We cannot be the place where they buy drugs and do drugs. The majority of people coming to Kensington to buy drugs and get stuck here," said Councilwoman Maria Quinones-Sanchez.

"We're stuck with minimal resources and maximum problem, but we're still not turning our backs on it. We're going to try to make it better," said Kenney.

City leaders acknowledge addressing the public safety aspect will be far more difficult, and Mayor Kenney is calling on the federal government to provide funding to help.