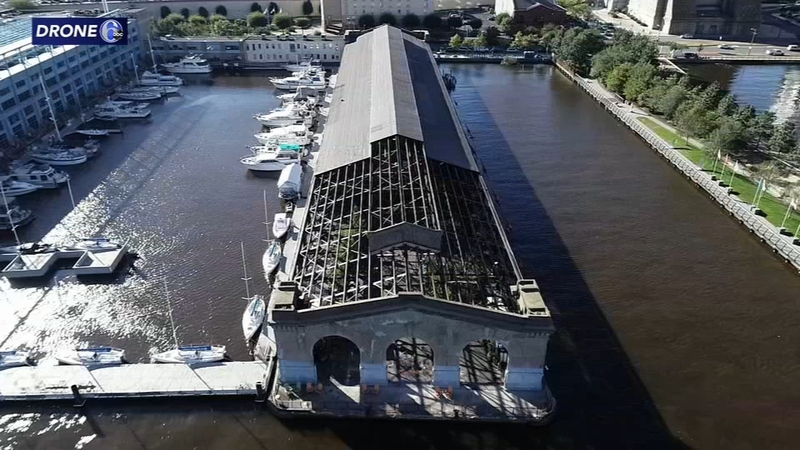 PHILADELPHIA (WPVI) -- The reviews are still coming in, but it seems that the Cherry Street Pier is going to be a hit.

It was an abandoned municipal pier that was built in 1919 then converted into the newest public space along the waterfront.

A traditional Indonesian dance was underway tonight, courtesy of Modero and Company from South Philadelphia.

All part of the grand opening of Philadelphia's newest public spaces along the waterfront.

President, Delaware River Waterfront Corporation Joe Forkin said, "This is a space that was built into a century-old shipping pier to really focus on Philadelphia's creative community."

The seventh pier park to open along the Delaware sits in the historic municipal pier 9, once a vital part of the city's shipping and trade community until the industrial decline in the mid-20th century.

It's one of the few surviving examples of early 20th century Philadelphia piers.

The Delaware River Waterfront Corporation managed to salvage much of the historic structure from the gabled wooden roof, masonry head houses, steelwork, and even the train tracks and train stopper.

"It was really important to us to preserve the history of what the building was that helped to build Philadelphia as a city which was the shipping industry back in the early 1900's," said Forkin.

Sally Griffith of Center City said, "I think it's great, I've been watching this develop and it's pretty cool. It's another great space."

"I've looked at this pier for many, many years and wondering what was finally going to become if it and it's an amazing, amazing transformation," said Mark Travis of Rittenhouse Square.

Steve Heinsinger of Old City said, "I think this is definitely going to help to bring people into town and to see this wonderful place with an awesome view."

And how about that patio and awesome views of the Delaware.

We asked Ben Mauri of Center City did he have to pay for his seats. He said, "Completely free."

Unlike the other pier parks, this one is expected to be open to the public year-round with ever-evolving venues like Antique Flea and Christmas holiday markets to name just a few.