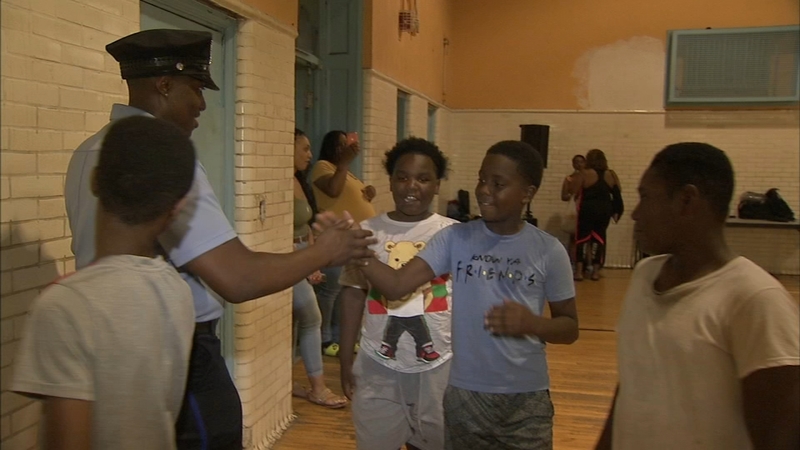 PHILADELPHIA (WPVI) -- It was slam dunk of an evening. Kids and basketball. It worked.

The kids certainly seemed to enjoy who they were up against: some members of the Philadelphia Police. Department

On Monday night several 22nd Police District officers laced it up for a few hours at the Cecil B. Moore Recreational Center.

Community outreach Officer Kiana Farlow said, "When you build relationships with the kids everything goes much easier and it's safer for everybody."

From the 22nd District to the 16th in West Philly, we saw officers there try and make a connection with the community as well.

They had haircuts for all, a clothing drive and barbecue.

The goal was just the same as the 16th District.

Captain Christine McShea said, "We're trying to reach an audience where kids are vulnerable and impressionable about their views. So we're trying to bridge that gap."

The events, though planned out weeks ago, carried a little more weight Monday night.

The officers and volunteers were specifically focusing on making the kids feel loved.

Volunteer Adrian Berry said, "We're here for them. We understand they feel like they don't fit in. But just so they know there are people who are praying for them."

The reality is youth across the city are at risk. One day they could playing ball. The next they could become the statistic of a crime scene.

In Philadelphia, just during the past two weekends, not counting week days, nearly a dozen young men in their early to late twenties have been shot.

This past Saturday night in Point Breeze alone, four men in their twenties were shot in the 2400 block of Morre Street.

But those we spoke with Monday realize these types of events could prevent something like that.

Sunday evening Philadelphia Mayor Jim Kenney acknowledged the issue tweeting, "We are doing everything we can to combat violence."

Last week his office announced the distribution of $700,000 to nearly four dozen community-based groups that offer violence prevention. The grants range from $5,000 to $20,000 for each group.

On Monday night Philadelphia District Attorney Larry Krasner's Office released a statement that reads, "Although Philadelphia has experienced a 3% decline in violent crime, Philadelphia is in the midst of an increase in shootings and homicides. The district attorney's office will continue working with our partners in government."

We asked people Monday if they thought the city was doing enough to combat violence.

The answer from everyone was it's not just the city, rather it was everyone who needs to do better in some way.
Report a correction or typo
Related topics:
community & eventsphiladelphia newsphiladelphia police
Copyright © 2021 WPVI-TV. All Rights Reserved.
More Videos
From CNN Newsource affiliates
TOP STORIES