"Nothing is more important than the well-being and health of those we serve," the dairy company said
WPVI
By Bryanna Gallagher 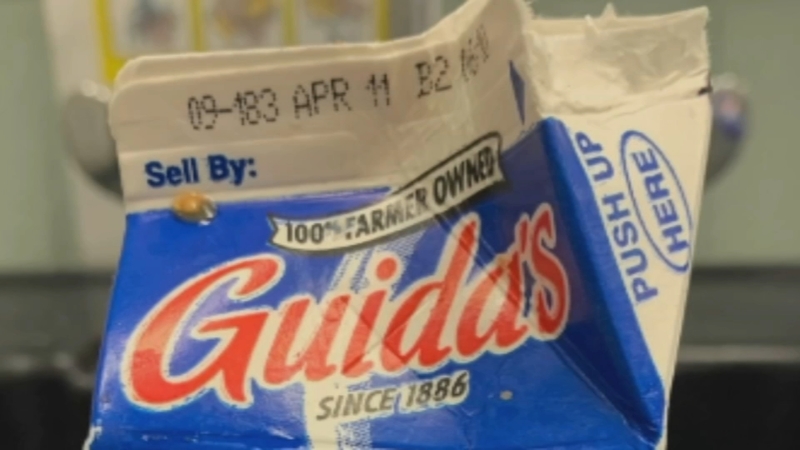 🥛PRODUCT RECALL IN NJ: More than two dozen kids were taken to the hospital after sanitizer was found in milk cartons in multiple Jersey schools. @6abc

Officials say thankfully, all students were released. They are urging all schools to stop selling Guida’s milk. pic.twitter.com/oOcNG3WjuW

According to the Camden School District, Guida's milk cartons were found to be filled with sanitizer, sealed and then distributed to schools.

Action News reached out to the dairy company Guida's, which is based in Connecticut.

In a statement Thursday, Guida's said they are disposing of 1%, low-fat half-pint milk cartons with a sell-by date of April 11 after determining that a food-grade sanitizer diluted with water was inadvertently introduced during production.

"Nothing is more important than the well-being and health of those we serve. Once we were made aware of this issue, we took immediate action and tested impacted product to verify there is no food safety risk associated with this product," Guida's said.

Students at the Early Childhood Development Center on Pine Street were taken to the hospital on Wednesday morning out of an abundance of caution, officials said.

"There was a concern and hazmat came to test the cartons. (The cartons) had some non-toxic digestible sanitizer that was inside of them," said Dan Keashen, the Camden County Director of Public Affairs.

Every child that was taken to the hospital was discharged in the afternoon with a clean bill of health, Keashen said.

But then the department received another call from Riletta Twyne Cream Early Childhood Development Center on Mulford Street.

Those students were also evaluated and later sent home.

Officials say nearly 52 children were checked out because of the tainted milk.

Action News spoke with parent Deborah Pollitt whose daughter was one of those students.

"Basically she was one of the second kids to throw up; the milk, they said, wasn't even looking like milk - it was like clear substance," said Pollitt.

Pollitt says her daughter did go to school on Thursday, despite her still having a small belly ache.

"It looks like something went wrong in the manufacturing process and then got into the distributing steam and ended up in these schools," Keashen said.

The company says the affected product is not available at retail outlets.