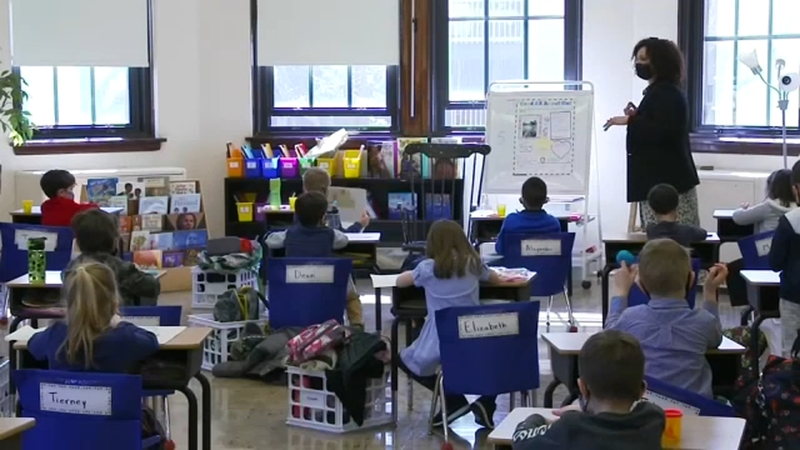 New developments in the COVID-19 pandemic have one leading epidemiologist re-evaluating his own advice.

Dr. Michael Osterholm is the Director of the Center for Infectious Disease Research and Policy at the University of Minnesota. He was also a member of Joe Biden's COVID-19 Advisory Board during the time between Biden being elected president and inaugurated.

Osterholm previously supported sending children back to school. He said the virus was not a major threat to children. Now, the situation has changed.

"Please understand, this B.1.1.7 variant is a brand new ball game," Osterholm said on NBC's Meet the Press. "It infects kids very readily. Unlike previous strains of the virus, we didn't see children under 8th grade get infected often or they were not frequently very ill, they didn't transmit to the rest of the community."

The B.1.1.7 variant was first identified in the United Kingdom. It's now ripping through parts of the country.

In Minnesota, Osterholm said more than 740 schools reported cases of the variant. In Michigan more young people are ending up in hospitals fighting more serious symptoms than previously seen in children with COVID-19.

This is similar to what health officials have seen in other countries.

The British Medical Journal wrote two months ago that "emerging evidence from Israel and Italy (shows) more young children are being infected with new variants of COVID-19."

Seeing that happen in his own backyard, Osterholm is now questioning his own previous advice.

"Anywhere you look where you see this emerging, you see that kids are playing a huge role in the transmission of this," Osterholm said. "All the things that we had planned for about kids in schools with this virus are really no longer applicable. We've got to take a whole new look at this issue."

Vaccinations are expected to help fight off the B.1.1.7 variant. However, Osterholm said there's simply not enough time to just rely on vaccinations.

"We're not going to have nearly enough (vaccine doses) in the next 6 to 8 weeks to get through this surge, and we're going to have to look at other avenues to do that just as every other country in the world who's had a B.1.1.7 surge has had to do."

The colossal error occurred at a COVID-19 vaccine site in Texas.

The difference between previous surges and another possible surge now is "the people most affected now are the younger individuals," emergency physician Dr. Leana Wen told CNN on Sunday.

Older populations have been prioritized nationwide for Covid-19 vaccinations. More than 54% of Americans 65 and older have been fully vaccinated, according to the CDC, while more than 75% of that same age group have gotten at least one Covid-19 vaccine dose.

But while that age group is now relatively well protected, Wen said, younger groups are still vulnerable as the B.1.1.7 variant circulates. The variant is more contagious and may cause more severe disease, experts have said. Research suggests it may also be more deadly.

"We're seeing in places like Michigan that the people who are now getting hospitalized by large numbers are people in their 30s and 40s," Wen said. "And now we're even seeing children getting infected in larger numbers too."

SEE ALSO | Read these tips before getting your COVID-19 vaccine

It's not just Michigan.

"What we're seeing is pockets of infection around the country, particularly in younger people who haven't been vaccinated, and also in school-aged children," former Food and Drug Administration commissioner Dr. Scott Gottlieb told CBS's "Face the Nation" on Sunday.

"If you look what's happening in Michigan, in Minnesota, in Massachusetts, for example, you're seeing outbreaks in schools and infections in social cohorts that haven't been exposed to the virus before."

"The infection is changing its contours in terms of who's being stricken by it right now," he added.

And a third of all of the county's Covid-19 hospitalizations were people younger than 45, according to Dr. Raul Pino, director of the Florida Department of Health in Orange County.

New Jersey officials said last week that variants, including the B.1.1.7 strain, were contributing to a rise in cases and hospitalizations -- including in younger age groups.

Between the first and last weeks of March, there was a 31% and 48% increase in the number of hospitalizations among the 20-29 and 40-49 age groups, respectively, state health commissioner Judy Persichilli said Wednesday.

How we can curb another surge of infections

Despite alarming warning signs, the US is not powerless, experts have stressed.

"We say it over and over again and we need the local people, we need the governors and the mayors and others to be able to say, we're not out of it yet," Fauci said.

"People say, 'Well you just want to confine us forever.' No, this is not going to last forever because every day that you get four million, three million people vaccinated, you get closer and closer to control."

Dr. Peter Hotez, dean of the National School of Tropical Medicine at Baylor College of Medicine. estimated Sunday that Americans need to hold on for "another four to six weeks, and then we'll be on the other side of it."

"All the vaccines seem to work just as well against this UK, B.1.1.7 variant ... so that is really good news," he said. "I have a lot of confidence that we're going to be in a really good place by the summer."

"But if you're not vaccinated, you have to behave as though you're highly vulnerable to this virus, this is not a time to get sick," Hotez added.