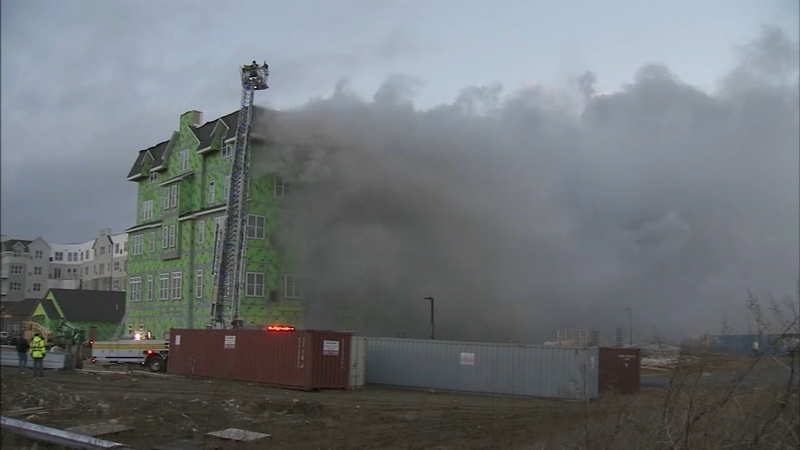 TREDYFFRIN TOWNSHIP, Pa. (WPVI) -- More than 150 firefighters were called to Tredyffrin Township, Chester County after a massive blaze ripped through a building under construction on Sunday evening.

It happened on the 900 block of Atwater Drive.

#BREAKING: The Action Cam in Tredyffrin, Chester County for a 3-alarm fire. This is happening along the 900 block of Atwater Drive. @TrishHartman on scene. @6abc pic.twitter.com/IT8Gm5svSD

Firefighters arrived to the scene around 3:30 p.m. with fire showing from the upper floors of the structure.

"We did have a partial collapse on the first floor on the southern side of the building, which also hindered fire attack," said Chief Andrea Testa with the Paoli Fire Company.

Thick smoke billowed from the side of the building and people gathered, watched and photographed the scene. The five-story building is a retirement community still in progress called Echo Lake. No one was living in the building at the time of the fire.

Fire officials say the fire started in the basement and spread into the upper floors.

As night fell, the winds picked up, and with two-thirds of the building still under construction, firefighters were met with challenges.

"No stairways. Floors with holes in them. A lot of construction debris. That and the wind conditions have made this very difficult," said Testa.

Echo Lake has not said what will happen for residents expecting to move in here in March. SageLife did put out a statement saying, "No one was in the building at the time and no injuries have been reported. We know it was contained to the South Tower of our new community, which is still under construction, and we are working with officials to determine the cause. SageLife would like to thank the local fire departments and first responders for their swift action."