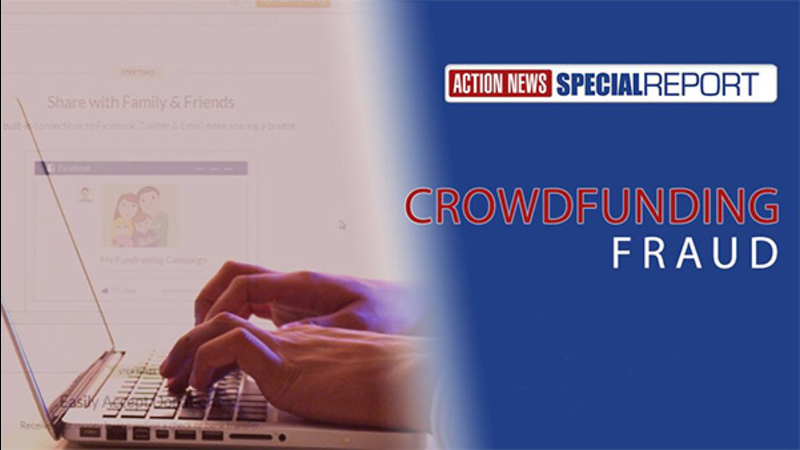 Crowdfunding has become quite the buzz word. It's when you fund a project or campaign by raising money from a large number of people - typically via the internet.

We certainly don't want to discourage people from giving and giving generously - but we do want to make sure your hard-earned money goes to only legitimate causes.

When she started the online fundraising campaign - bills were piling up and money was running out.

"I was desperate and hard up. What do you do? I felt like I had no help," said Rodriguez.

Through her GoFundMe page - Rodriguez found many, many people willing to help.

Her crowdfunding cry has raised more than $7,000.

"I can't say thank you enough for that," said Rodriguez.

By now - you've probably either given to or started your own GoFundMe campaign.

GoFundMe claims to be the world's No. 1 personal fundraising website - having raised more than $680 million with $7,000 new campaigns started every day.

But before you give, here's a fact and a warning.

It's a fact that GoFundMe is a for-profit business and takes a 5-percent cut of each and every donation.

"It's a way of raising large sums of money and isn't that likely to attract the criminal element? I think so," said Frank Farley, Ph.D, Temple University.

There have been so many allegations of bogus campaigns - a Facebook page is dedicated to exposing them.

Go Fraud Me was created after its operator tried unsuccessfully to take down a GoFundMe campaign she believes is fraudulent.

"I wasn't the only one who reported it - there were a good 100, 200 people sending emails trying to report it," said Adrienne Gonzalez.

Gonzalez says the campaign remains up and active.

And that is far from the only campaign accused of being bogus.

"Anyone can start a fundraiser on GoFundMe for any purpose and there's zero verification whatsoever," said Gonzalez.

The parents of little AnnaLea Guice say someone fraudulently used their daughter's picture for a bogus GoFundMe campaign.

Fallon Mouton set up a GoFundMe page for the family of a woman who died during childbirth.

The family never gave her permission nor saw a dime. Mouton has now pleaded guilty.

And Kelly Johanneson has been charged for pretending to have breast cancer and starting a fraudulent GoFundMe page called KellysHope that raised $4,400.

"What upsets me is there's really not a lot of recourse for people who have been defrauded," said Gonzalez.

GoFundMe does verify whether users have a Facebook page but that's it.

"They could put some sort of protections in place to make their platform a little less susceptible to fraud," said

On its website - GoFundMe says, "Unfortunately there is no way to 100% guarantee that a user's GoFundMe donation page contains accurate or truthful information." And in bold - "Only donate to people you know & trust. When in doubt, don't donate."

Unless things change - that is the best advice right now.

But critics say that kind of defeats the purpose of crowdfunding sites.

Action News reached out to GoFundMe, and they answered our questions below:

1. Does GoFundMe attempt to verify that a campaign AND the person setting up the campaign are legitimate? If so, what does GoFundMe do?

With millions of campaigns, it's not feasible for GoFundMe to investigate the claims stated by each campaign organizer. Rather, we provide visitors with the tools to make an informed decision as to who they choose to support. We must insist that all potential donors follow the advice stated on each and every GoFundMe campaign: "Only donate to people you personally know and trust." GoFundMe and its payment processors have many systems in place to catch and deter fraudulent activity.

2. What is GoFundMe's response to criticism that it should do MORE or do "something" to prevent bogus campaigns from appearing on its platform? What does GoFundMe do with complaints of bogus/fraudulent campaigns? How does it handle these situations? What is its general response?

Users are able to report any suspicious activity to our team by clicking here.

3. What is GoFundMe's advice to people wanting to make sure they donate only to legitimate crowdfunding campaigns?

The only way to be 100% sure of the details behind a campaign is to personally know the campaign organizer. This is why we strongly suggest that donors only give to people they personally know and trust.

Unfortunately, I'm not able to share this information. However, I can tell you that because crowdfunding creates such a robust paper trail of account holder activity, fraud on GoFundMe is incredibly rare. With nearly $1B raised from more than 10M donors, it's clear that people trust GoFundMe to help them raise money for the things that matter to them most.

7. Are you aware of the Go Fraud Me Facebook page set up specifically to warn people about allegedly fraudulent GoFundMe campaigns? Any response?

I would encourage anyone who believes there is fraudulent activity happening on GoFundMe to report it to us at this link - our team will investigate right away.

8. Can you comment on how many complaints you've received about the following complaints being allegedly bogus/fraudulent and is GoFundMe investigating these campaigns:

Due to privacy concerns, I'm only able to discuss the details of campaigns with the organizers. If any donors have questions or concerns about their specific donations, we're happy to address those: http://www.gofundme.com/contact
Related topics:
personal financeinternetcrowdfundingscamfraudconsumer
Copyright © 2021 WPVI-TV. All Rights Reserved.
More Videos
From CNN Newsource affiliates
TOP STORIES