The man everyone knows: The life of Donald "Ducky" Birts is a legacy in Black history

"Ducky" uses his encounters with celebrities, activists and politicians to help his community.
WPVI
By TaRhonda Thomas 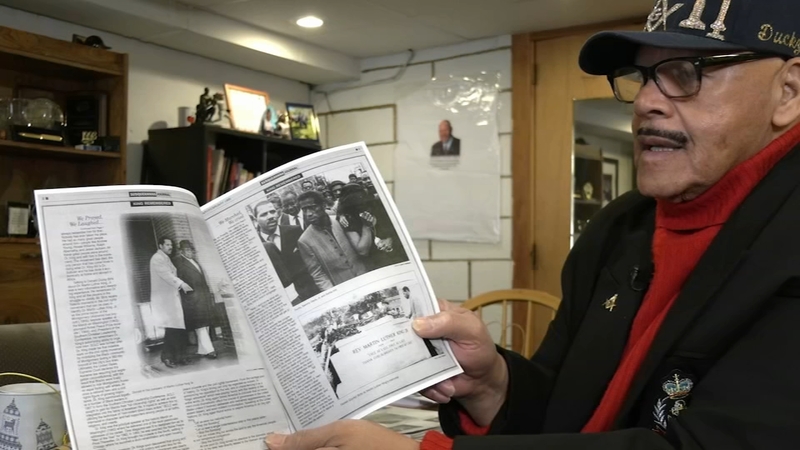 PHILADELPHIA (WPVI) -- As he pulls open a series of file cabinets, Donald "Ducky" Birts is a man on a mission. He's searching for a booklet that details his place in Philadelphia Black history.

But the stacks of photos and documents are not part of a museum or archive collection. They're all in his basement where Birts has more keepsakes than he can count.

"People wouldn't believe what I've got down here," said the 85-year-old as he sorted through filing cabinets organized by year.

Birts' basement is filled with photos of famous faces, including a photo of him with everyone from baseball greats Hank Aaron and Willie Mays to former presidents Jimmy Carter and Richard Nixon.

The Camden native made a name for himself with the nickname that his grandmother gave him.

"I was bowlegged when I was young, and she would call me Donald Duck," he said of the nickname "Ducky."

It wasn't long before he was in the company of other big names. When he held court with politicians, entertainers, athletes and activists, he always remembered something he learned from a former boss.

"(He said) 'Whatever you do, you take a picture, and I want you in it,'" Birts recalled.

But for the seasoned businessman and activist, taking photos was never really about a photo op. He used it as an opportunity to help his community.

"All I want to do is know, can you help my people?" he said of his dealings with big-named individuals and companies he encountered while fighting for equality during the civil rights movement.

"If it was good for my kids, my community, my family my friends, I would be there. I would do it," he said.

Birts became pivotal in the civil rights movement alongside Philadelphia legends like Rev. Leon Sullivan and national figures like Jesse Jackson, working with him as Jackson started Rainbow PUSH Coalition.

He says Jackson had the type of organization that other civil rights figures hadn't worked their way up to at the time, including Rev. Dr. Martin Luther King Jr. Birts also worked with him during the civil rights movement.

He was also there for King's family after his assassination. Photos show Birts arm-in-arm with Sammy Davis Jr. and in front of Eartha Kitt as they joined other mourners during King's funeral.

"Oh yeah, that was my baby," he said of his friendship with Shirley Chisholm, the first Black woman to be elected to Congress.

His business also took on a tone of activism, as Birts was the first store owner to sign a contract with Progress Plaza, the nation's first African-American-owned shopping center which was opened in Philadelphia by legendary local activist Rev. Leon Sullivan.

Ducky's Dashery sold the latest styles and drew in the biggest celebrities.

"Muhammed Ali used to hang in my store," said Birts, adding that he also was friends with another legendary boxer. "Joe Frazier was my neighbor! Right down the street from my store was the gym."

But while Birts dressed the stars, he was also thinking about students.

"(At) Cheyney University, I must have gotten at least 500 kids scholarships in my lifetime," he said.

You may have already supported the cause with a carton of eggs featuring the logo of the Ducky Birts Foundation.

Birts has archived his well-lived life in a book titled Ducky The Risk Taker. Even Birts can't believe the name he's made for himself.