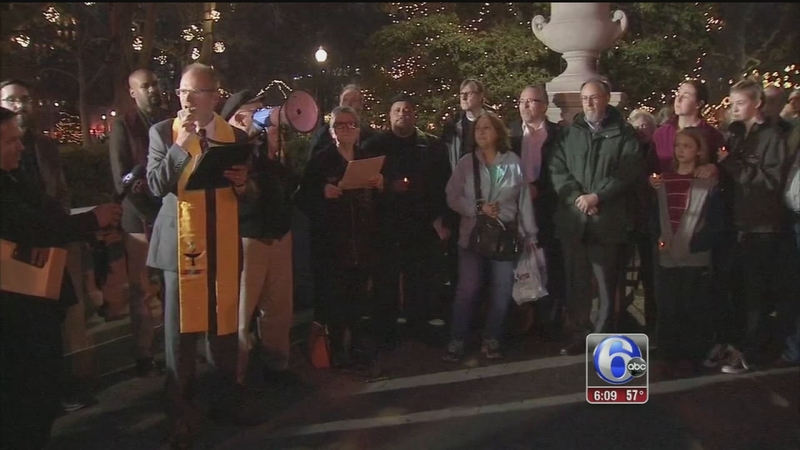 VIDEO: Vigil of solidarity in face of religious extremism

CENTER CITY (WPVI) -- Religious and civic leaders from across Philadelphia are coming together to deliver a powerful message. They're taking a strong stand against violent extremism.

People from all religious backgrounds gathered on Rittenhouse Square to express solidarity and support for the Muslim community. Their message: whether it be rhetoric on the politic stage or a vile action on a local mosque, none of it will be tolerated.

Peter Pedemonti from the New Sanctuary Movement, tells us, "We can choose to give into the fear and hatred, or we can really choose to live out the best of who we are."

There was no mention of Donald Trump, but rather a focus on the common denominator of all religions.

"As a country too we're better than that. And this is a time to really pray together, to be together to send a very clear message that this is not what any religion is about, this is not what the U.S. is about," Pedemonti said.

With the country still immersed in shock from the attacks in Paris and San Bernardino, the Muslim community has seen a backlash, both verbally from the political stage and as close as their place of worship.

Sunday night a severed pigs head was thrown in front of the Al-Aqsa Mosque on Germantown Avenue.

But immediately afterword there were countless acts of kindness that seem to parallel the message of Thursday night's vigil. People from the community sent the mosque flowers and cookies and countless messages of support.

Abdur Rahman, Principal of Al-Aqsa Islamic Academy, says, "Whether you're in Islam or Judaism or Christianity or you're not in any religion, you have a beautiful heart. This is what God gave us."

Rahman also said, "The more love and affection we can show for individuals like these guys who threw the pigs head - I don't have any ill will towards these individuals."

That message of compassion and forgiveness was potent at the vigil. Many like the principal of the Islamic high school next to the mosque say engaging in verbal sparring matches with someone like Donald Trump won't help silence anti-Muslim sentiment.

"I feel Donald Trump is a lost soul. He's lost his basic conscience, he's lost his humanity. He's getting into a very dark space in his heart. I feel sorry for the brother," Rahman said.

But Thursday morning, leaders of an interdenominational clergy, the Philadelphia NAACP and community leaders had different feelings, and demanded the GOP disqualify Trump from the presidential race.

Terrence Griffith, President of the Black Clergy of Philadelphia, says, "When we hear that Muslims must be temporarily banned from entering the United States, Hitler comes to mind."

However, Thursday night's vigil organizers say it is not about Trump, but a concentration on moving forward as people of faith and as Americans.