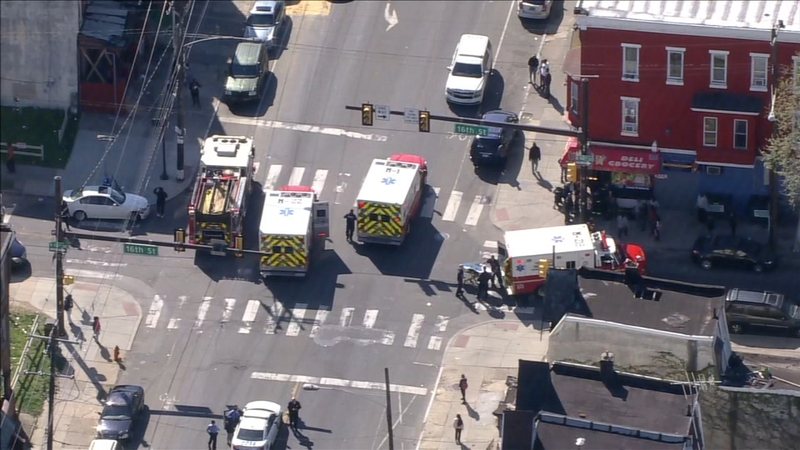 PHILADELPHIA (WPVI) -- Six people were injured after a driver intentionally tried to run them over in North Philadelphia, police said.

It happened around 3:50 p.m. Tuesday at 16th Street and Lehigh Avenue.

Police said they received a 911 call about a 44-year-old man trying to hit people with his gray Buick Century following an altercation.

According to police, six people ranging in ages from 17 to 42 years old were hurt in the incident.

Witness Ricky Baker said it was like a bowling ball striking bowling pins, except that it was a car striking people.

"He just bowled them people down man, like it was crazy," said Baker.

Witness Lorenzo Beverly said he "never seen anything like that; in fact, I get emotional talking about it."

Temple University student Jessica Nace was passing through the neighborhood when she noticed a crowd beating on a man in a car in front of her.

"They were pounding him and hitting him, beating him up in the car," said Nace. "Then they pulled him out of the car and he was on the ground and they were kicking him and stuff."

She said that's when the suspect in the Buick, apparently the brother of the man being beaten, drove his car into the crowd.

"Kind of hit the crowd of people, the front of my car, and then ended up on the sidewalk," said Nace.

Witnesses said there were people on the ground scattered everywhere.

Two people were transported to Temple University Hospital in critical condition. The conditions of the four other victims are unknown at this time.

"And then some people from the neighborhood pulled the 44-year-old driver out of the vehicle and assaulted him, causing injuries to his face," Philadelphia Police Chief Inspector Scott Small said.

The driver was arrested and placed in custody at Hahnemann University Hospital.