Bicyclist hit by car in Center City, rushed to hospital 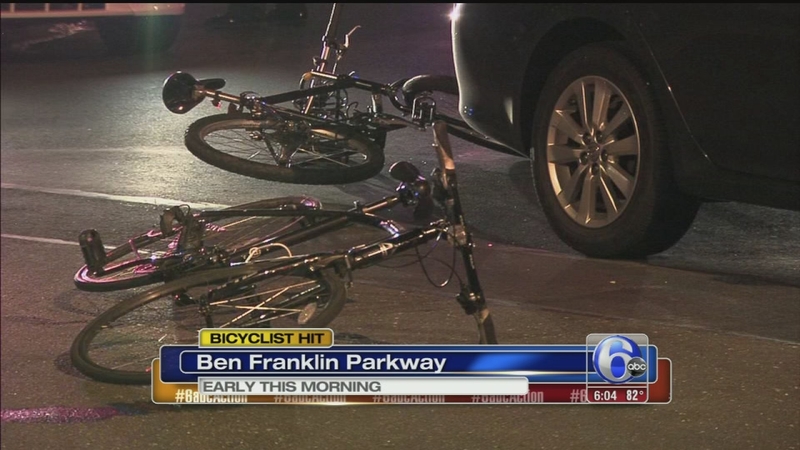 PHILADELPHIA (WPVI) -- Police are investigating a crash that left a bicyclist seriously injured in Center City.

It happened around 12:30 a.m. Saturday at the intersection of 22nd Street and the Ben Franklin Parkway.

Investigators say a man and a woman were riding their bikes when a car hit the woman.

The crash threw that 28-year-old woman onto the windshield. She then went under the front wheels of the car.

Firefighters pulled the woman out before rushing her to the hospital.

The woman suffered several broken bones and is in serious condition at Hahnemann Hospital.

So far, it's not known who had the right-of-way or if the bicyclists were wearing any kind of reflective gear. The driver was briefly held on suspicion of DUI but was later released.

We talked to bicyclists on Saturday who told us riding at night comes with risks.

"First of all, I don't ride at night. Second of all, if somebody is aggressive, I'm like 'OK go. I'll pull over. It's not that serious,'" said Kieu Tran of South Philadelphia.

One case of aggression was recently captured on camera. Just this past Thursday, the Bicycle Coalition of Greater Philadelphia posted a GoPro video from the helmet of a Philadelphia cyclist.

The woman says she was biking with her two children - ages five and seven - in a cargo bike on South 11th Street when she encounters a vehicle blocking the bike lane.

After checking behind her and passing the vehicle, a man pulls next to her and yells at her, using obscene language and gestures.

"Go (expletive) yourself with your GoPro. you (expletive)! You have two kids and you just pulled out without even looking?!" the driver is heard to say on the video.

The Coalition is working to not only reduce Philadelphia's crash rate involving bikes - which it says has crept up in recent years - but to also promote acceptance.

"We need to just expect that each other is on the road and be respectful. Follow the rules of the road, whether you're a cyclist or a driver," said Bob Previdi.

Bicyclists we talked to agree it should be a group effort.