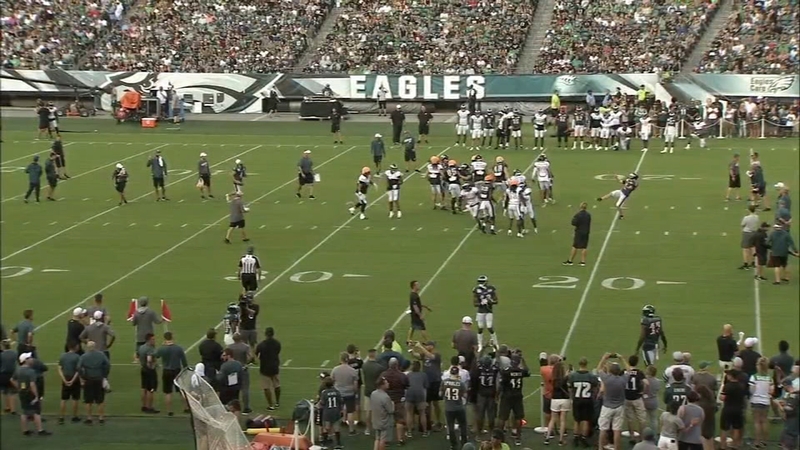 More than 40,000 Birds fans smiling from ear to ear to welcome some Sunday night football back into their lives, even if was just an open practice.

"It's very exciting," said Bob Myers from York Pennsylvania. "I'm just excited to be here to surprise my old man, got him tickets. So, here we are," added his son, Jason Myers.

The sea of green lined up early outside the Linc for what is the only open practice this season. Fans shelled out $10 to enter this year. Proceeds will be going to the "Eagles Autism Challenge" for research.

Sunday, the Eagles raised more than $475,000 for the organization.

The cause is near and dear to many families that were in attendance.

"My brother has autism, so it'll be a nice treat for him," said Adam Palmowski.

The evening was also a treat for the Sporel family from Oreland, whose son with autism had a special moment with Swoop.

"We felt obligated to get the tickets. We are really proud that they are doing this for the autistic children. We're very excited," said Megan Sporel.

The Eagles' practice also paid tribute to the Armed Forces, with a military appreciation night.

A moment of silence was also held for the victims of the El Paso and Dayton mass shootings.

For some fans, like Ashley Kodet, open practice holds special meaning and is becoming a must-do given that her little one is now part of a new tradition.

"She was born one week after the Super Bowl," she said.

Of course, every fan in the building is expecting big things this season.