WPVI
PHILADELPHIA (WPVI) -- Mayor Jim Kenney announced the members of the new Philadelphia Board of Education on Wednesday morning.
The new board members will participate in a 'Listening Tour' in the coming weeks. Dates, times and locations can be found at this page on Phila.gov.

The Mayor's Comments about the new Board members:

Chris McGinley and Joyce Wilkerson
"I am grateful to both Joyce and Chris for the work they have done over the past year and a half on the School Reform Commission," said Mayor Kenney. "Thanks to their leadership, the SRC voted to dissolve last November. Without them, we would not be here appointing a new board today. I welcome the role they will play in ensuring a smooth transition to local control. They have a unique understanding of the challenges the District faces, and a demonstrated commitment to making bold moves we need to embrace."

Angela McIver
"Angela has a passion for math and for education," said the Mayor. "When you hear her talk about it, you can see that she is the type of person who gets kids excited to learn about math. We talk a lot about preparing our kids for the tech jobs of today and tomorrow. And that starts with a strong STEM education. I believe that Angela's content knowledge and passion for quality education will make her a fantastic Board member."

Mallory Fix Lopez
"Educator. Community Motivator, Entrepreneur. Mother. Neighbor. That's how Mallory described herself in her Board application," said Mayor Kenney. "She is a small business owner who believes every business should give back to their neighborhood school and puts her restaurant's money where her mouth is. And she is a fierce advocate for her neighborhood school which her child will attend in 3 years. I look forward to her now serving as an advocate for quality schools in every neighborhood."

Maria McColgan
"Maria's career has always centered on children and education. Her experience as a teacher in Philadelphia public schools helped shape her passion for learning and education, and also led her into a second career as a pediatrician who has provided care for thousands of our most vulnerable children."

Lee Huang
"As an economic consultant, Lee focuses on economic analysis, policy research, and organizational strategy - and articulates a clear vision of why the success of our education system is so important to the City's overall success. In his application, Lee showed off his finance background by calculating the number of consecutive school years in which he and his wife would have at least one child the School District-23 years. I am certain Lee is committed to improving education for all students."

Julia Danzy
"Julia's career speaks to her expertise in the various systems that intersect with public schools to ensure the well-being of students," said Mayor Kenney. "I believe this will make her a knowledgeable and strong advocate for children on the Board."

Leticia Egea-Hinton
"Leticia brings a valuable social services perspective to the Board of Education," said the Mayor. "She has been a public school parent and will draw on her personal experience as well as her expertise in service of Philadelphia children."

Wayne Walker
"When I heard about Wayne's credentials, I was so impressed that I wondered if he would really be seriously interested. Then I learned that we had something in common-a Jesuit education which has taught us the importance of public service. I am so very glad that he will bring his expertise to public service and play an important role in the formation and success of the new Philadelphia Board of Education."

The panel chose the members from 500 nominations and applications earlier this year.

Mayor Jim Kenney said, "When we asked Philadelphians what they wanted to see in future education members. They said having members committed to education was their number one priority."

The new members say they are excited about the district's future and want to learn more about its inner workings.

New board member Wayne Walker said, "We want to over the next two months - learn about what's actually going on."

New board member Joyce Wilkerson added. "I believe in the focus on literacy. I think we are on the right track of that."

Philadelphia Federation of Teachers President Jerry Jordan has been pressing for local control for years.
When Jordan was asked, did it concern him that 3 of the new board members currently had children in charter schools?

He said, "I believe all children deserve a good education, so this is not about where the children attend."

The new board plans to hold community events at different schools. 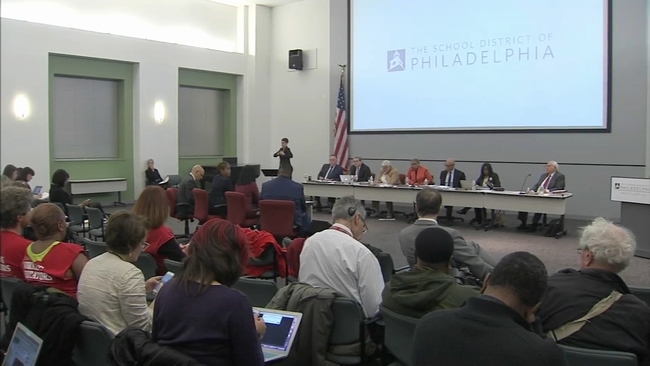