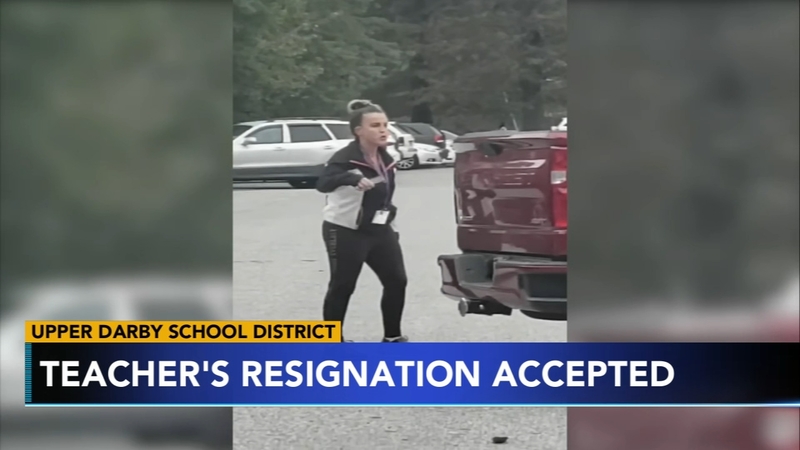 UPPER DARBY, Pennsylvania (WPVI) -- The school board in Upper Darby, Pennsylvania has accepted the resignation of a middle school teacher in the wake of a racially-charged altercation involving a parent in the school parking lot earlier this month.

On October 10, there was a minor car accident in the parking lot at Drexel Hill Middle School as a parent was dropping off his child.

In a video, you can see the teacher, now identified as Renee Greeley, come out behind a truck several times as an altercation ensues with the parent.
EMBED More News Videos

The school board has accepted the resignation of a middle school teacher as reported during Action News at 10 on October 22, 2109.

"He and a teacher were involved in a car accident in the parking lot of Drexel Hill Middle School and that the teacher proceeded to make several racial and other derogatory remarks to him," said the Upper Darby School District in a statement following the incident.

Greeley was placed on administrative leave after the initial incident. According to school documents obtained by Action News, Greeley offered her resignation on October 17, 2019.

During a meeting Tuesday night, the school board accepted Greeley's resignation after a unanimous vote.

The only parent to speak during the meeting said "her son feels safer."

During a special meeting at Upper Darby High School, the school board voted to accept the resignation of Drexel Hill Middle School teacher, Renee Greeley. The only parent to speak during the mtg says “her son feels safer.” @6abc ⬇️ pic.twitter.com/0U916XPhC0