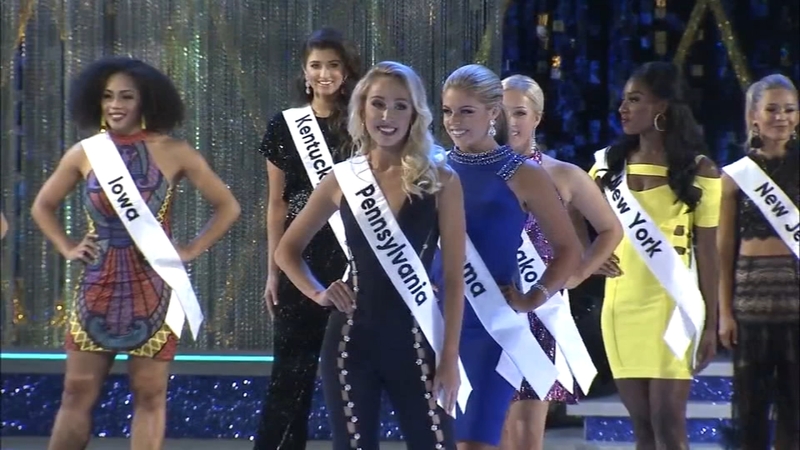 ATLANTIC CITY, N.J. -- Contestants from Florida and Wisconsin scored the first preliminary wins in the post-swimsuit era of the Miss America pageant Wednesday night, and proclaimed a new day had arrived for a piece of Americana that's trying to reboot itself in a rapidly changing world.

The competition swapped swimsuits with interview questions that were as daunting for some as walking across the stage in a bikini and heels.

Miss Wisconsin Tianna Vanderhei won the onstage interview competition for her comments on how higher education should be more affordable and more widely accessible.

Both said they were excited to be the first winners in the revamped Miss America competition, which has generated controversy for its decision to eliminate swimsuits - a staple of the pageant since it began 98 years ago in Atlantic City.

"Swimsuit is behind us," Vanderhei said after Wednesday night's competition ended. "It's sad that it's gone, but I understand the reasons it's gone."

"People are going to get to see what Miss America is all about with these changes," Tyson added.

The preliminaries began amid a revolt by state pageant officials unhappy with the way the decision to drop swimsuits was made, and who are demanding that top leadership, including chairwoman Gretchen Carlson, step down.

The current Miss America, Cara Mund, has accused Carlson and CEO Regina Hopper of bullying and silencing her - allegations the two officials deny.

Mund did not reference the controversy in her opening remarks, which followed a prolonged standing ovation. But she did pay tribute to local and state officials without mentioning national ones.

"This only exists because of our volunteers," she said. "We wouldn't have any organization if it weren't for them."

A spokesman for opponents of the current leadership said 46 state organizations have signed letters calling for Carlson and Hopper to resign; only Arkansas, Kentucky, Minnesota, Nevada and Vermont have not signed.

The first of three nights of preliminary competition began with a big change: In past years, one talent and one swimsuit winner were named in each of the three preliminary nights.

This year, instead of a swimsuit winner, the winner of an onstage interview will be named.

Some of the questions were softballs: Where is the most interesting place you've ever visited, and how did you grow emotionally from it? Others put some contestants squarely on the spot on red-hot social issues.

Miss Texas, Madison Fuller, was asked if NFL players kneeling during the National Anthem are showing freedom of speech or disrespect.

"Where NFL players who kneel are standing up for what they believe in, there is an arena to promote change, not during the anthem," she said.

Miss Mississippi Asya Branch was asked whether health care is an entitlement.

"Health care is not an entitlement, but we do all need it," she said. "We should work within our country to make it more affordable and available. No one deserves not to have health care."

The format is similar to what will happen during Sunday night's nationally televised broadcast on ABC.