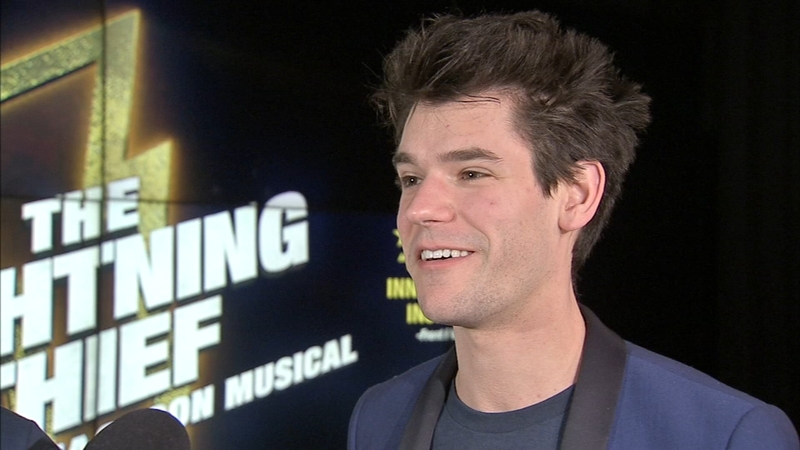 PHILADELPHIA (WPVI) -- Percy Jackson is a demi-god. Chris McCarrell is not, but the actor still feels a connection with the character he is currently playing on stage at the Merriam Theater.

The musical follows Percy as he just discovers he has powers. He goes on a search for his mom and Zeus' lightning bolt to prevent a war between the gods.

"I relate the most to his love for his mom. I have a really tight relationship with my mom. The idea going to the underworld to figure out where she went, that's not that easy for me to get...I have not done that," McCarrell told 6abc while stopping at our studios for an interview and performance.

The Broadway hit 'The Lightning Thief: The Percy Jackson Musical' runs through Sunday in Philadelphia. The musical is an adaption of the best-selling novel by Rick Riordan and its movie follow-up.

Opening night was Tuesday and McCarrell says it was amazing to be in Philly.

"So much fun. The place was packed. We got three stories! Everyone was really excited to have us. It was a cold night, but we were so excited to start that show. It went great," McCarrell said.

Jorrel Javier, who plays Percy's friend Grover, put everything in one word: Great.

"It went great. Great house. Great energy. We're just excited to be in the great city of Philadelphia," Javier said.

McCarrell said, despite being blinded by lights at times, he was able to get a look at the packed crowd and the very tall theater.

"Hi up there!" he motioned as if he was waving to those watching from the balcony.

'The Lightning Thief' might deal with fantasy and Greek mythology, but Javier says the audience is able to connect to its theme and message.

McCarrell agrees, saying even though most may think the show is only meant for the young crowds, everyone can find a lesson or two.

The two are making the most of their time in Philadelphia before the touring show moves on.

California-native Javier said he knew that Wawa would be his first place to stop by.

"The entire cast is tired of me talking about Wawa!" Javier said.

McCarrell is no stranger to Philly. He had a solo at this past year's Thanksgiving Day Parade.

But he admits, he hasn't checked out Wawa yet, but now knows he must.

It's a lesson Percy Jackson would be proud of.

Cast of 'The Percy Jackson Musical' speaks to 6abc. Full interview from January 2019.