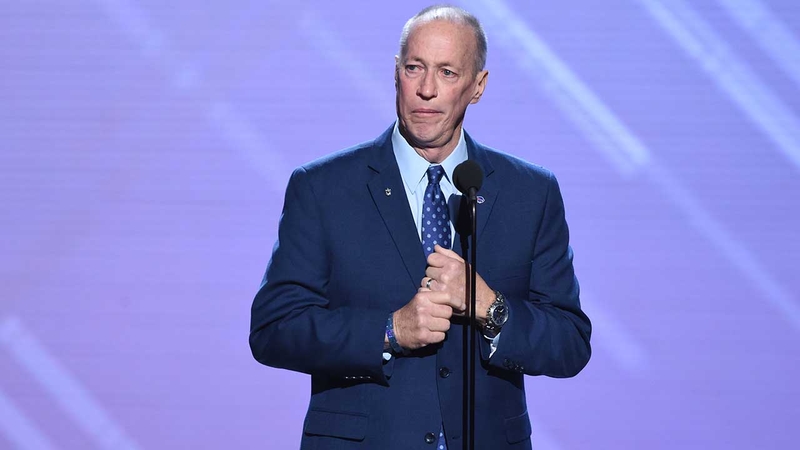 ESPYS: Jim Kelly to be honored amid cancer fight

While fighting cancer, legendary Buffalo Bills quarterback Jim Kelly had to change one of the "F"s he uses to center his life. While he once relied on "fun, family, friends and fans," the "fun" has been changed to "faith."

When Kelly accepted the Jimmy V Award for Perseverance at the ESPYS on Wednesday, he spoke about his new four "F"s, emphasizing the need to put a smile on the face of someone who's suffering.

"Make a difference today for someone who is fighting for their tomorrow," Kelly said.

Jim Kelly's words inspired us all when he received the Jimmy V Award at tonight's #ESPYS.

Kelly spoke about how that mentality had made a difference in his own life.

"My kids, my friends, when they came in to see me, not once did they ever have a frown on their face," he continued. "So I just urge anybody out there, if you have somebody out there who's suffering, it doesn't have to be cancer. It can be somebody not having a good day. It could be your mom or your dad. It could be your grandparents. What you say to them and the smile you have on your face, that could be the difference in them making it to the next day."

Kelly, whose battle with oral cancer began in 2013, was first declared cancer-free in 2014, ESPN reports. Then in March of this year, Kelly announced that scans had shown signs of cancer returning.

He had surgery to remove the cancer and reconstruct his jaw. Kelly currently has a mouthful of stitches and will not be able to eat solid foods until the fall.

"I pray when September has rolled around that I can finally bite into a piece of meat and not soup every day," he said.

On Tuesday Kelly announced that he will return to New York next month for an unexpected "check-up."

"I have some things that I want to have looked at, and then we'll go from there. I don't know whether I'm going to be here for two days, four days or in and out," he said.

The Jimmy V Award is given annually to "a deserving member of the sporting world who has overcome great obstacles through perseverance and determination." It is named after legendary North Carolina State University basketball coach Jim Valvano, who also battled cancer.

Valvano gave his now-famous "Don't ever give up" speech at the 1993 ESPYS, just weeks before he passed away.

When he played in the NFL, Kelly led the Bills to four straight Super Bowl games, though he never won one. He was inducted into the Hall of Fame in 2002.