WPVI
EXETER TWP., Pennsylvania (WPVI) -- Police in Berks County are calling a young man who landed a plane on Route 422 a hero and have nicknamed him 'Exeter Sully.'

Emergency officials told Action News the pilot called in an engine failure on his Cessna around 9:30 p.m. Monday.

Police said the pilot navigated through vehicles to land the plane on Route 422 near Daniel Boone Road in Exeter Township.

The plane only came to a stop after it hit the back of David Poly's car.

After assessing the damage, Poly called his brother.

"When he called me and told me he was in an accident I thought it was a car accident. When I got there... God! That's crazy," says Emmanuel Poly. 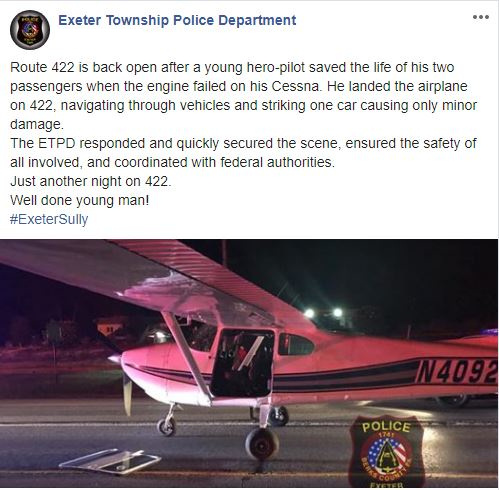 Poly was able to drive away unharmed. The pilot, copilot and passenger of the plane also walked away without injury.

On a return flight from New Hampshire to Lancaster, the Cessna lost its only engine about 4,000 feet in the air. The 22-year-old pilot and 24-year old copilot made q quick decision to find a makeshift runway.

"He landed doing 85 knots, he says about 100 miles an hour, and brought it safely right to the intersection," said Sgt. Sean Fullerton of Exeter Township Police.

That's when neighbors came out.
"I actually had to go back in and get my glasses cause I'm like, 'I think there's a plane on the road,'" said Janet, who lives about 150 yards away.

The young pilots flew under overhead wires and in between wooded areas and houses, a nearly flawless execution. One pilot told responding officers he'd been flying since the age of 16.

"We talked about training, preparedness, what it felt to actually draw on the training - a very impressive young man," Sgt. Fullerton said.

Police compared him to "Sully" Sullenberger, the pilot of the 'Miracle on the Hudson.' They said the pilot saved the life of his two passengers by making a successful landing.

It's not something anyone nearby will soon forget.

"In this year, you never can see it all. Apparently, anything could happen in 2020," Janet said.