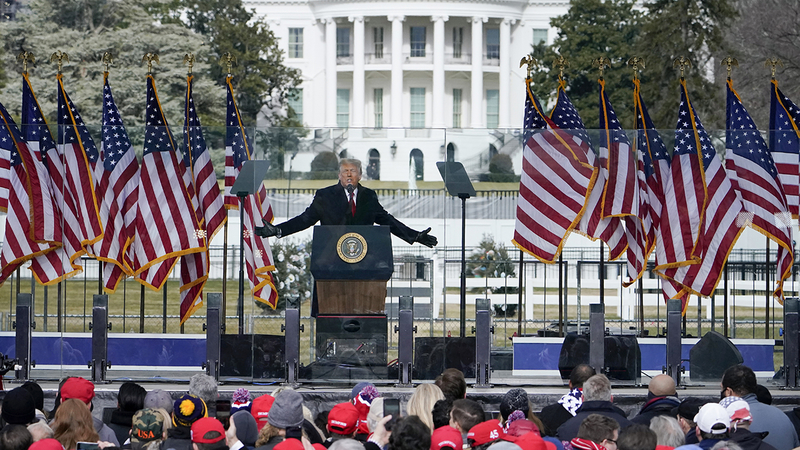 EMBED <>More Videos
WASHINGTON -- The chairman of the House select committee investigating the Jan. 6 attack on the U.S. Capitol and surrounding circumstances announced on Friday that it had issued subpoenas to "14 individuals who participated as 'alternate electors' for former President Trump."

"The Select Committee is seeking information about attempts in multiple states to overturn the results of the 2020 election, including the planning and coordination of efforts to send false slates of electors to the National Archives," he said in a statement. "We believe the individuals we have subpoenaed today have information about how these so-called alternate electors met and who was behind that scheme. We encourage them to cooperate with the Select Committee's investigation to get answers about January 6th for the American people and help ensure nothing like that day ever happens again."

The committee said it has obtained information that groups of individuals met on Dec. 14, 2020, in seven states carried by then-President-elect Joe Biden, then submitted bogus slates of Electoral College votes for President Donald Trump.

"The so-called alternate electors from those states then transmitted the purported Electoral-College certificates to Congress, which multiple people advising former President Trump or his campaign used to justify delaying or blocking the certification of the election during the Joint Session of Congress on January 6th, 2021," a committee release said.

Ample evidence has emerged over the last year of what happened at the U.S. Capitol on Jan. 6, 2021.

In an alleged plot Trump and his allies crafted to overturn the election, then-Vice President Mike Pence would have declared the seven states that submitted the alternate slates of electors as in dispute, and ultimately hand the election to Trump. However, Pence rejected the pressure to do so, sticking to his strictly ceremonial role, and the National Archives never accepted the uncertified documents for congressional counting.

In the modern era, electors "are supposed to now be almost like computers and mechanically do the bidding of the popular vote" in their states, Edward Foley, a law professor at Ohio State University and the director of the school's election law program, told ABC News.

Unlike the disputes over electors in 1876, and a more limited dispute over Hawaii's electors in 1960, "all of this is bogus because it's all built on the big lie [of widespread election fraud] that has no foundation," Foley said of the 2020 effort by Trump supporters.

Deputy Attorney General Lisa Monaco said in an interview earlier this week that prosecutors in the Justice Department are evaluating criminal referrals regarding the fake Electoral College certifications that sought to declare Trump the winner in states he actually lost to Biden.

"We've received those referrals. Our prosecutors are looking at those and I can't say anything more on ongoing investigations," Monaco told CNN.

She declined to go into further detail but instead said the Justice Department was "going to follow the facts and the law, wherever they lead, to address conduct of any kind and at any level that is part of an assault on our democracy."

Last week, Rep. Mark Pocan, D-Wis., urged the Justice Department to open an investigation into the fake electors from Wisconsin, and said he would soon introduce legislation to specifically prohibit similar attempts in the future.

In investigating exactly what happened on and around Jan. 6, the select committee also intends to protect democracy from future attacks over a falsely disputed election, especially, Democrats say, because Trump has suggested he will run in 2024.

The Supreme Court last week also denied Trump's request that hundreds of pages of his presidential records from Jan. 6 not be turned over to the congressional committee -- a huge win for the panel, which is planning to issue an interim report on its findings over the summer.

In the six months since it was created, the select committee has interviewed more than 350 witnesses, received more than 300 substantive tips and issued more than 50 subpoenas -- for phone and email records, Trump administration documents, witness testimony and bank records, according to the committee's public disclosures and lawsuits filed by witnesses.

The panel has also received nearly 40,000 pages of records -- including text messages, emails and Trump administration documents provided by the National Archives in four separate tranches.

The former president has repeatedly attempted to discredit the work of the committee and has urged his allies and aides not to comply.