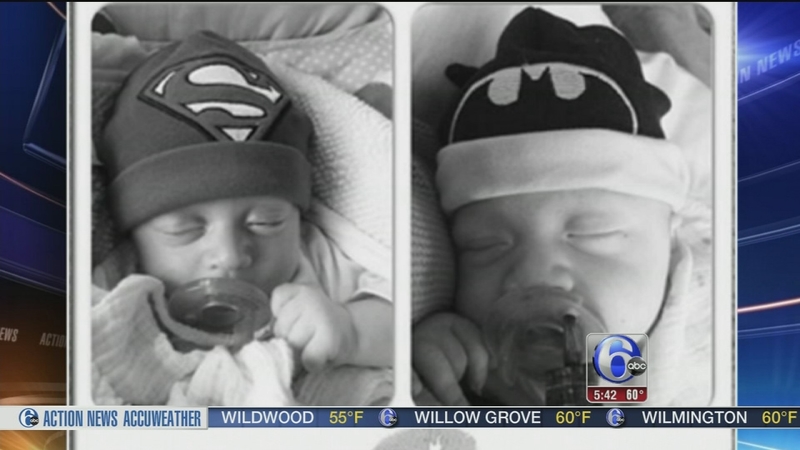 HUNTINGTON VALLEY (WPVI) -- Friday marked London Brooks' 1-week birthday. At just over 3 pounds, the adorable but strong little preemie remains in the NICU. While mother Stacey says her visits are long, they're not enough.

"Everyone says, 'Oh you know you can leave or you can do that, and I'm like she's a part of me. There's nowhere I'd rather be," said Stacey Brooks. "It's a piece of my soul right there."

An emotion still raw with mom of four Kelly Gallagher.

"The minute I walk into that unit, the smell, the sounds, it just takes me right back," said Gallagher.

Gallagher's twin boys were born eight weeks early. For three weeks, she traveled to and from the NICU, rarely seeing her older children or husband.

She called it the worst time of her life, but a time she also drew inspiration from, creating the nonprofit "The Superhero Project." Born out of her home, it began with Gallagher herself making goodie baskets for NICU families.

"When you look at that (hat), Conner's head was the same size as my hand so that would fit him," said Gallagher.

The name is inspired from a picture of Conner and Curran wearing superhero hats as preemies.

After a few months, she thought of another way to help - Angel Eye Cameras. The technology allows family and friends to see and interact with the babies when they're away from the hospital at any time.

"I did a lot of the sitting at the hospital while he was here taking care of the other kids so these cameras would have been amazing for him to feel a connection as well," said Gallagher.

After two fundraisers and a GoFundMe page, she raised $15,000 to help Holy Redeemer Hospital purchase the cameras, which go live April 4.

Now the goal is more of these cameras in more hospitals in the area, and to educate families so perhaps the cameras can be used in other areas of the hospital as well.

"I hope these cameras are going to change a lot of lives," said Gallagher.