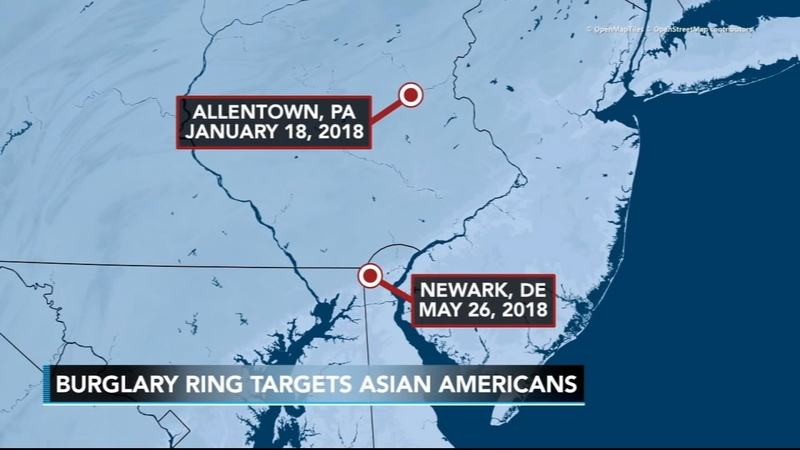 On Tuesday, the U.S. Attorney's Office in Newark, New Jersey announced the arrest of eight people in connection to the ring that is responsible for more than 50 residential burglaries.

According to a federal affidavit, the crimes occurred between December of 2016 through March of 2019. Fifty residential homes were burglarized in Delaware, New Jersey, Pennsylvania, and New York areas.

Glasco is from Bethlehem, Pa., and Armour is from Easton, Pa.

Officials say two of the burglaries happened in the tri-state area.

Homes in Newark, Delaware and Allentown, Pa. were burglarized in 2018.

In March of 2019, after Armour allegedly evaded arrest by the FBI during a burglary in New Jersey, authorities searched his Easton, Pa. home.

An affidavit detailed what they discovered:

A review of law enforcement records associated with the Kimber Handgun revealed that it was reported stolen from the residence of an Asian business owner on or about January 18, 2018, in Allentown, Pennsylvania. Further, law enforcement later determined that several items recovered from Armour's residence, including jewelry and coins, were derived from residential burglaries of Asian business owners in Pennsylvania and New Jersey."
A cooperating informant explained to investigators how the defendants found their victims:

While the crimes occurred several years ago, many in the Asian-American community say it adds anxiety in light of the uptick in Asian hate seen nationwide.

"We've paid more attention in the last year or so to anti-Asian racism, but the reality is it's been happening for a long time," said Sam Chen, a political science professor at Northampton Community College. "I think stereotypes are what drives racism, and they might be complimentary or not."

"The problem is once we give a stereotype, we address people with a broad brush, and this is true regardless of race, religion, or gender," Chen continued. "We begin painting with a broad brush, and we begin to generalize them instead of seeing them as individuals. And we generalize their cultures instead of really understanding and seeking to understand what those cultures actually are. That ends up driving racism."

The U.S. Attorney's Office said all eight people had their first appearances in court.