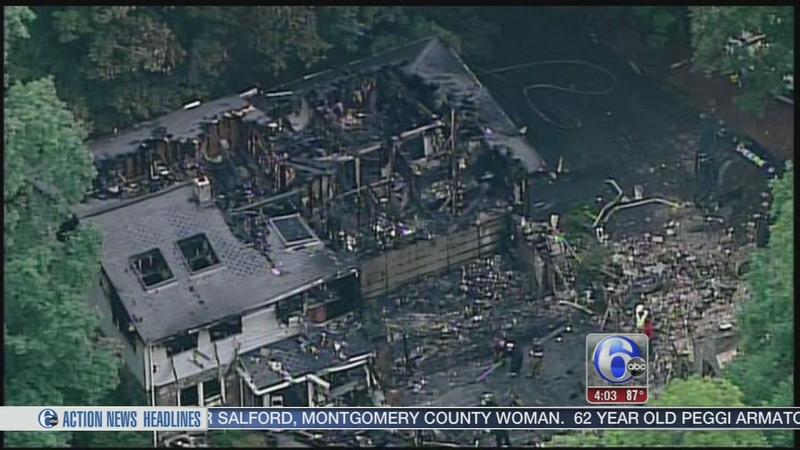 LOWER SALFORD, Pa. (WPVI) -- One woman is dead and four adults are being treated for minor injuries following a fast-moving house fire in Lower Salford Township.

Harleysville Fire Chief Todd Burns said heavy fire was showing from the back of the 2-story home when firefighters arrived.

The blaze quickly went to 2 alarms as crews called in water tankers to help fight the fire.

On the scene of a fast-moving house fire in Lower Salford. 4 people injured. pic.twitter.com/te3KzEMY2W

Firefighters immediately focused on the rear of the building, where they tried to free a woman who was trapped in an upstairs room.

"It was clear there was one woman trapped in the rear of house," said Burns. "We tried to enter the house, when the floors collapsed underneath us."

Crews were forced to leave the building and were not able to rescue the woman.

The woman, later identified as 62-year-old Peggi Corinne Armato, was pronounced dead at the scene.

Four adults - Armato's mother, husband, and two grown children - who were also in the home escaped with minor injuries.

Family members tell Action News that it was barking from the family dog that woke them up and alerted them to the blaze.

Once it was out, heavy equipment was brought in to help sort through the rubble. Several damaged vehicles were loaded up and towed from the scene.

An investigation is now underway to determine the cause.