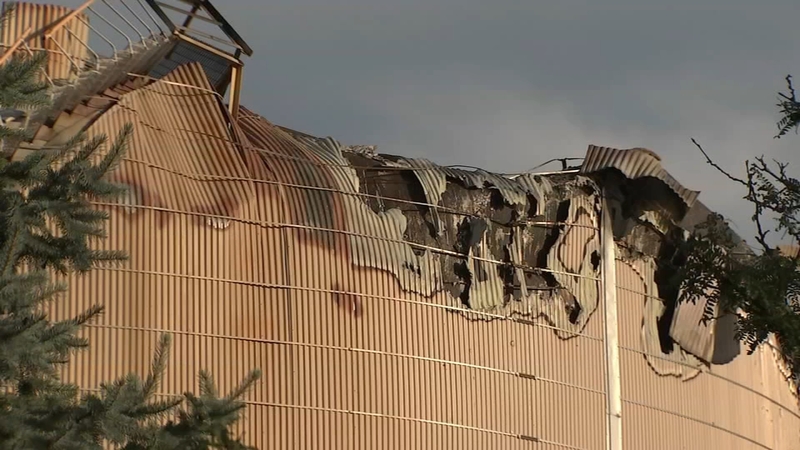 Officials said a large tank containing asphalt began to smolder around 12:45 a.m. at Blueknight Energy Partners on the 200 block of Water Street in Gloucester City.

Neighbors said they woke up to a loud bang and their homes shook.

"Just about to lay down and go to bed, and just heard a loud boom, sounded like fireworks, but just way too loud for that," said Matthew Pease.

The Action Cam was on the scene of an asphalt tank fire in Gloucester City, New Jersey.

Kathy Geiser said she spent all morning in her car with her son worried about their home and neighborhood.

"He came running downstairs screaming that he heard an explosion and the asphalt plant around the corner caught fire," said Geiser. "It's scary. It's only a block away."

The Gloucester City Fire Department responded to the blaze along with other fire crews. A hazmat unit was also on the scene, as asphalt is highly combustible.

"We had water supply issues to contend with," said Desmond Chiodi, Battalion Chief of the Gloucester City department. "There's a limited water supply in this area and limited access, being that it's bound by the Delaware River. (The asphalt is) very flammable, it could have exposed the other tanks which were also full, and there's plenty of wood-framed dwellings nearby, so that's why we initiated an evacuation so quickly.

Officials evacuated those in the surrounding area for about four hours as a precaution, until it was safe to return. Approximately 30 families were evacuated within a three to a four-block radius.

"Around 1 a.m., they were knocking on the door telling us to evacuate," said Todd Draper.

There is no word yet on what caused the fire.

So far there are no reports of any injuries.