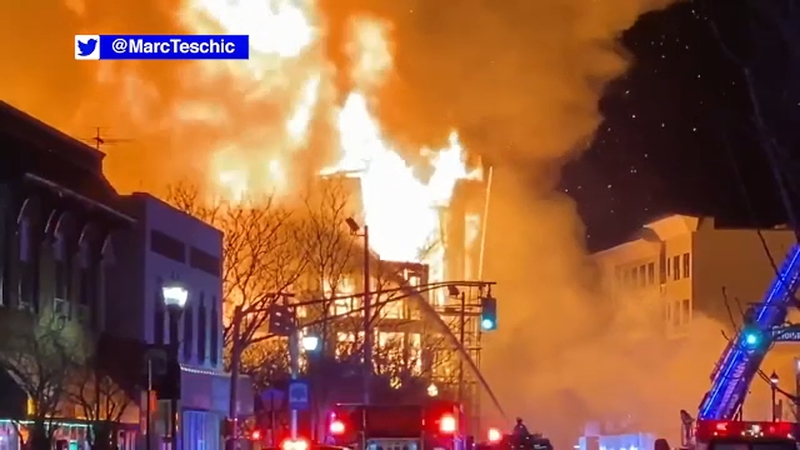 BOUND BROOK, New Jersey -- The cause of a raging six-alarm fire that started in an apartment building under construction in New Jersey and spread to several other buildings late Sunday remains under investigation.

Four buildings were gutted by the flames, which broke out around 8 p.m. in a five-floor apartment complex on Mountain Ave and East Main Street in Bound Brook.

"When I looked about the window, I seen like a big orange glare in the window," witness Joe Orlick said. "I stood out here for hours. It looks like an action movie, the way the flames went through the buildings. It was all slow. It just went up."

"The whole sky was orange," witness Eric Dabeek said. "It was almost like Armageddon."

"Both buildings being on the construction the interiors were completely unfinished," Bound Brook Assistant Fire Chief Richard Colombaroni said. "It was bare lumber in the building, so that had no fire rating, no sheet rock to slow it down."

It was brought under control several hours later.

No injuries were reported, but the Red Cross said they were helping 24 people from 11 families displaced by the fire.. Some 400 residents were left without power as a result of the fire.

Police had asked residents in the area to stay vigilant as the flames jumped from building to building. They called it a "disastrous" fire that spanned two city blocks.

"Thank God it wasn't occupied because people wouldn't have gotten out," one witness said.

There is no word yet on the cause, but the wind made the fire hard to contain. No construction work took place on Sunday.

The complex was called the Meridia Downtown, which Bound Brook Borough Councilman Abel Gomez said included 174 apartments and retail space. Gomez said the apartment complex across the street - also under construction - had space for 60 residential units and a restaurant.

The councilman said the destroyed complexes were developed with private funding and within the downtown redevelopment zone. The area had suffered a series of floods over the past two decades, and the apartments were supposed to be part of a downtown renaissance following the 2016 completion of a flood control project.

"Bound Brook was in the process of a renaissance," Gomez said. "After all the floods we've had here, and now we have this fire."