Sex offender among those cited for illegal door-to-door solicitation in Folcroft, Pa. 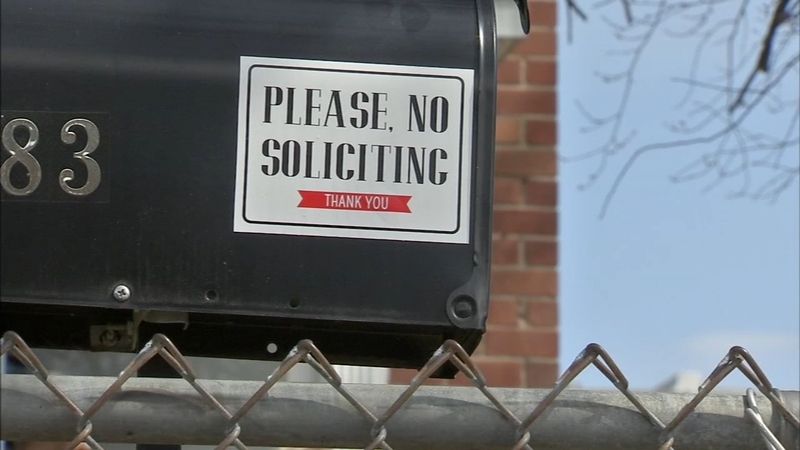 Sex offender among those cited for illegal door-to-door solicitation

FOLCROFT, Pa. (WPVI) -- Folcroft Borough Police say they have had a number of issues with solicitation without borough approval over the past few months, mostly from various energy companies.

Last week police say when one worker was stopped they discovered he was a Megan's Law offender.

Folcroft Borough Police Chief William Bair says officers been giving out citations and fines to people soliciting door to door without a permit.

"Basically you need to check in with the borough. Who's going to be here?" said Bair.

Chief Bair says last week four people from New York-based Atlantic Energy were cited for going door to door without approval from the borough - and without the standard background checks.

"Those individuals get a background check on them so we know who is in town soliciting their business," said Bair.

He says one came up as a convicted sex offender, and likely wouldn't have been granted a permit to go door to door.

Atlantic Energy responded with a statement, part of which says:

Atlantic Energy recently became aware of a report of sales agents marketing in Folcroft without required permits and background checks. We have opened an internal investigation into the incident and are fully cooperating with the appropriate authorities. Atlantic's policy is to require background checks and training for all agents that market on its behalf. To the extent an issue is identified, Atlantic will immediately take all necessary steps to remedy the situation.

We spoke with neighbors who say they regularly deal with door-knocks from strangers. They say they're glad to see police cracking down.

"We've seen people walk around before. But this time they stopped him," said Folcroft resident Patricia Murray.

Sugie Johnston has a no soliciting sticker on her mailbox, but she says that doesn't stop solicitors from coming to her door.

Policies on solicitation can vary depending on where you live.

Any company that wants to solicit in Folcroft must come to the borough office and apply for one. There's a $200 fee.