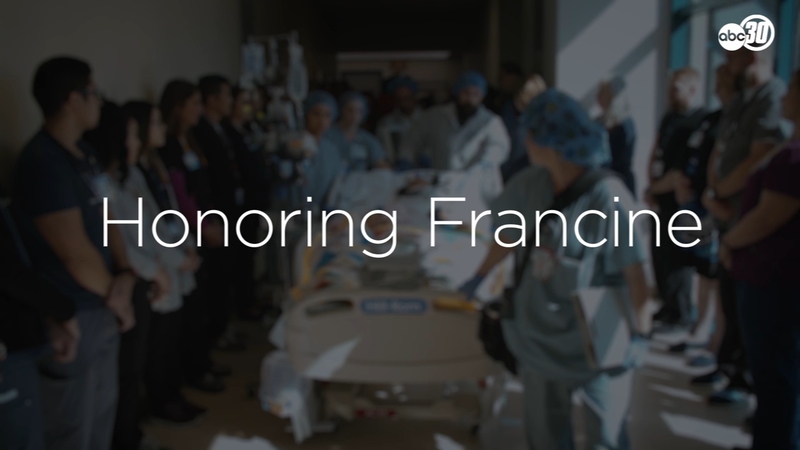 FRESNO, Calif. -- At Valley Children's Hospital, Hanah Salazar had to do something that no mother ever wants to do: say goodbye to her firstborn child.

Hanah said that some of her final words to her daughter Francine were, "You know what, Mommy will be fine. We will all be fine; you go ahead and go to the light, to God."

Wednesday, August 7, started as an ordinary afternoon for the Salazar family. Hanah was driving her van around Tulare County, California, picking up her kids after they finished their after-school programs.

That day, Hanah decided to take a different route home so that she could get her kids a treat on that hot summer day.

"For some reason, I wanted to take them for ice cream. I was going to surprise them, actually. I didn't tell them," Salazar said.

The family never made it to the ice cream shop.

As they crossed through a rural intersection, a driver from out of town blew through a stop sign and slammed into the family's van driving 60 to 80 miles an hour.

That moment would change the family's entire life.

All of the kids were wearing seat belts, but immediately after the crash, Hanah realized her 10-year-old daughter Francine, who was seated in the very back of the van was silent.

"I can see my daughter's head flapping, and it's not stable, so I know there's some injury. So they pulled her out and started CPR," Salazar said.

It was a scene Hanah can only remember in doses. Much of that afternoon is still a foggy memory.

Hanah says that she tries to remember Francine in life. The summer was a fun one for the fifth-grader, filled with late nights watching K-pop videos, and writing down her plans for the school year.

Her sudden absence has been crippling for her family and for the staff at Cottonwood Creek Elementary School in Visalia, California. Teachers returned Monday to the devastating news and accepting reality has been hard for everyone.

Although a nurse herself, Francine's mother was initially in complete denial. But, as the days went on, and doctors at Valley Children's Hospital did more tests, the family had to accept their outspoken, compassionate and friendly daughter was brain dead.

"We know that Francine was given the best care here you could ever imagine. They didn't not do anything. They did everything possible for us," said Francine's stepfather, John Blakely.

Despite the tremendous pain that they were in, Francine's family made the difficult decision to donate her organs.

They said that knowing Francine, she would have wanted to make this life-saving gift.

"My daughter is a caring, loving, selfless person, and she would help everybody before herself," Salazar said.

The doctors, nurses, and staff at Valley Children's Hospital in Madera, California, wanted to honor Francine, so for the first time in the hospital's history, they held an honor walk.

As she was taken to the operating room, they lined the hallway to honor the gift that the fifth-grader gave through her sudden and heart-wrenching death.

Right before Francine went into the operating room, her mother did her hair for the last time. She put it in a braid.

Officials with the Donor Network West said six lives would be saved from her organ donation, and 75 other people would be healed.

The family has set up a GoFundMe page to help with funeral expenses.