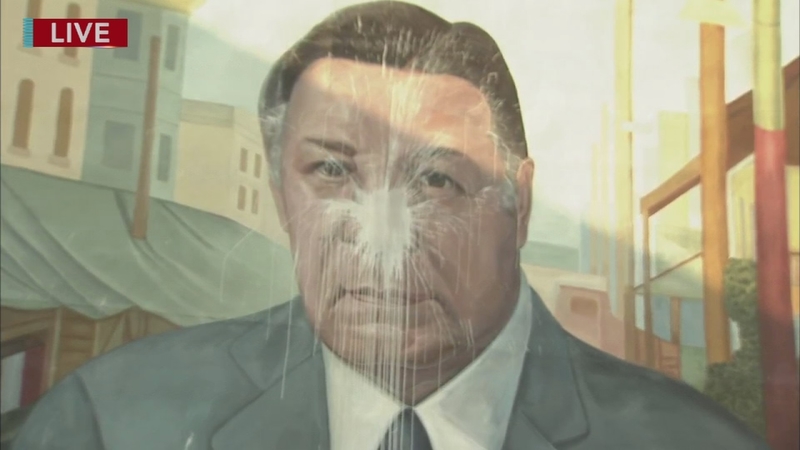 SOUTH PHILADELPHIA (WPVI) -- More acts of vandalism have occurred in the wake of violence that has swept the nation.

An officer was traveling down South 9th Street at Montrose Street around 3 a.m. Saturday when he noticed a group of men defacing the mural with paint.

Police gave chase and were able to quickly apprehend one of the suspects.

"Shame on them. They should find something else to do," Frank Rizzo, Jr. said.

From white paint on a mural to "black power" on a monument. The likenesses of former Mayor Frank Rizzo under assault this week. Over the phone, his son, Frank, Jr. reacts.

"It bothers me to see things like this happen but in any instance you have to remember it's one or 2 people. It's not a majority," he said.

Overnight vandals struck this Italian Market mural. Splattering paint and writing "kill killer cops and RIP David." One person was taken into custody. In daylight, the words were quickly covered then removed.

It's personal for artist Joe DiBella who helped paint the frequently vandalized mural of Rizzo in 1995.

The latest incident comes days after a Germantown man allegedly sprayed the statue of Rizzo at the Municipal Services Building.

But the monument - coming under attack by city councilwoman Helen Gym too. In a tweet about racism and slavery, she called for the Rizzo statue to be taken down.

The city's police commissioner then mayor from 1972 to 1980, Rizzo was a controversial figure among some. His son says he was a heavy handed law enforcer, but not a racist.

"He didn't care if a criminal was white, black, yellow, and purple. He enforced the laws," Frank, Jr. said.

In a column last week, the head of Mural Arts Philadelphia also raised the possibility of removing the Rizzo mural. Some calling it divisive. Others we spoke with say it should stay.

Deval Miller of West Philadelphia said, "We're living in 2017. Those things shouldn't matter. We should be worried about the war Donald Trump is starting in the White House.

Randy of South Philadelphia said, "I think it should stay. He was mayor of the city for 8 years. Big figure in city's history. I may not like everything he did. I don't think he's the evil person.

News of the vandalism making its way to Rizzo's 101-year-old widow who her son says is taking it hard.

"She knows about it. She's used to it. He's a guy who people have been taking shots at for the better part of his life," Frank, Jr. said.

Police continue to search for seven others in connection with the vandalism.