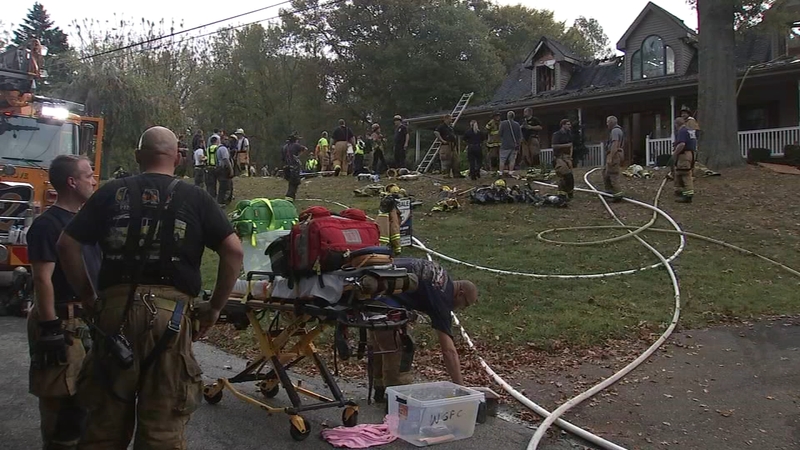 FRANKLIN TWP., Pennsylvania (WPVI) -- The emergency that called firefighters to the 600 block of Old School House Road on Tuesday morning was a two-alarm fire; however, that's not what sent one of the volunteers to the hospital.

"I was in the middle of the road over there trying to stop these cars. And they don't stop," said Tom Quinn, who has been volunteering with the Avondale Fire Company for 55 years.

Quinn was directing traffic in the area of the fire trying to help a fire engine get through the intersection when a driver didn't yield his calls to stop.

"(The drivers) have to stop for the fire trucks. He didn't want to stop," he said.

The car hit Quinn, knocking him backwards. As he went to the hospital, firefighters battled the two-alarm fire at a vacant home that had a for sale sign in the front yard.

"5:30 in the morning is a difficult time for manpower," said West Grove Fire Chief Justin Gattorno, "We had to reach for manpower at that time."

They put out a call to area fire departments. Ten fire companies responded to the home. Flames were shooting through the roof when they arrived.

"They made entry through the front door and were able to attack the fire from the inside," said Gattorno.

The home has heavy damage. Its roof is nearly gone. Chester County Fire Investigators are looking into a cause.

It took two hours to extinguish the flames. Three hours after the fire started, firefighters were still putting out hot spots.

Three hours after he was hit, Tom Quinn was back in the road directing traffic.

He's gone to the hospital to get his elbow bandaged up. But he was otherwise feeling fine.

The driver of the car stopped. But Quinn said it would have been even better if that driver just slowed down in the first place