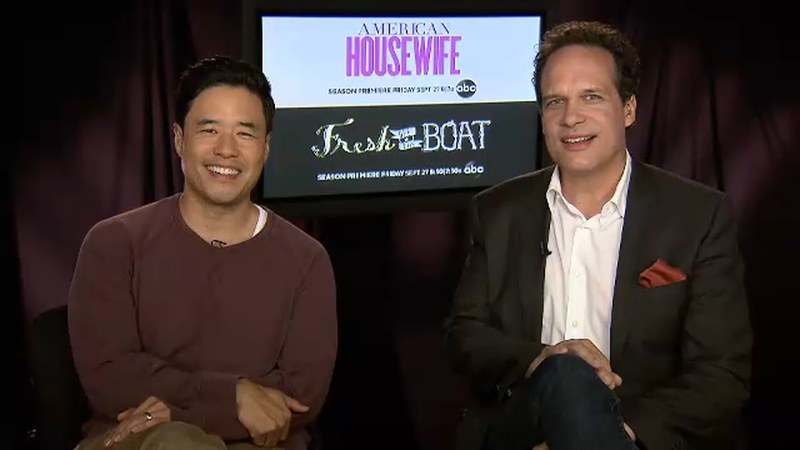 NEW YORK -- Just call them the Fathers of Friday Night! Randall Park from "Fresh off the Boat" and Diedrich Bader from "American Housewife" talked about their back-to-back shows on ABC Friday nights.

Park is back as "Louis Huang" for "Fresh off the Boat" as it enters its 6th season and Bader returns as "Greg Otto" for "American Housewife's" 4th Season.

"I guess people really associate with the show and find it funny as well and we're really happy and elated that we've found an audience," Bader said of "Housewife." "And I think better than ever, Friday night, nice solid block of shows that have communality, I think it's going to be a nice hour for you to sit with your family."

As the shows grow older, so do the kids!

"It's crazy how tall Hudson has gotten, the kid who plays 'Eddie' on our show, he's like 7 feet tall, it's wild!" Park said.

I got the tingles too cuz #FreshOffTheBoat premieres TONIGHT at 830 pm on ABC, watch with us! @FreshOffABC pic.twitter.com/qFvb1gvihV

The story lines may have matured a bit with Evan on "Fresh off the Boat" getting the "talk" and the Otto family on "American Housewife" is ready to part with their minivan.

Put the moving boxes away and get comfortable because #AmericanHousewife returns TONIGHT! pic.twitter.com/OFmwaNxP7T

"For a lot of families it's a really big deal, their family vehicle," Bader said. "You sort of hate it because it's awful and it's ugly and it's kind of dumpy, but at the same time it's yours," Bader said.

There are some big episodes coming up on both shows this fall. On "Fresh off the Boat" and "Eddie" is heading off to college soon.

"They're all becoming men," Park said. "There's a lot of laughs and a lot of heart."

Meantime, there will be a "Drew Carey Show" reunion on "American Housewife" a bit later this season. You won't want to miss it!