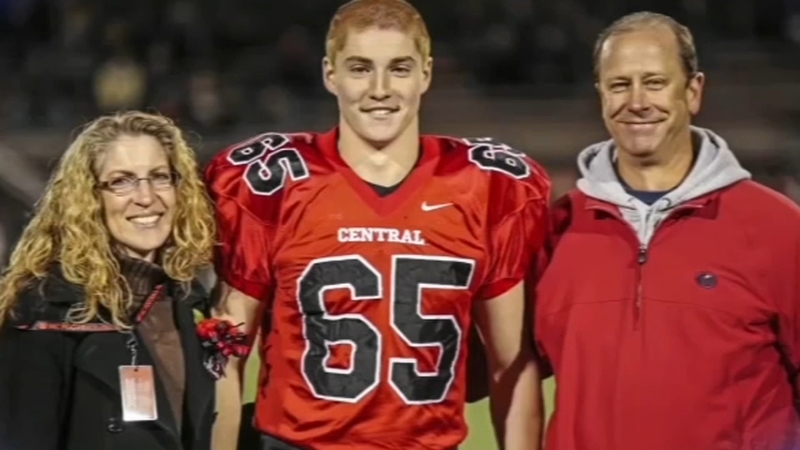 HARRISBURG, Pa. (WPVI) -- A new anti-hazing law prompted by the death of a Penn State student after a night of drinking in a fraternity house early last year was signed Friday by Pennsylvania's governor.

Gov. Tom Wolf called it "long overdue" as he put his signature on legislation to enact stricter criminal penalties and permit courts to order confiscation of frat houses where hazing has occurred.

The law is named for Tim Piazza, a 19-year-old sophomore engineering student who died from severe head and abdominal injuries after suffering a series of falls inside the Beta Theta Pi house in February 2017.

RELATED: Timeline of events from the night Tim Piazza died

His parents Jim and Evelyn Piazza, who have become national advocates for anti-hazing efforts, attended the bill signing ceremony in the state Capitol.

"Our young people deserve better and we must protect them from this rampant criminal behavior," Jim Piazza said.

The law requires schools to maintain policies to combat hazing and classifies as felonies the hazing incidents that result in severe injury or death. High schools, colleges, and universities are required to report hazing incidents.

Authorities said Tim Piazza, who was at the Beta Theta Pi house for a ceremony to accept a pledge bid, consumed a dangerous amount of alcohol before being injured in a fall down a set of basement steps.

Security camera footage recorded how fraternity members made half-hearted and even counterproductive efforts to address his injuries. Piazza spent the night, mostly on a first-floor couch, in visible agony, and had additional falls.

He ended up unconscious in the basement by the next morning. After he was found, it took fraternity members 40 minutes to summon an ambulance. He died the next day at a hospital.

About two dozen Beta Theta Pi members have faced charges related to Piazza's death. Prosecutors have secured guilty pleas from some of the defendants, while others are scheduled for trial early next year.

"The fact that aggravated hazing is a felony is powerful, it's powerful from the police side of things," Barron said.

The new law defines hazing as conditioning acceptance into a group on breaking the law; consuming food, booze or drugs that put someone in emotional or physical harm; brutality of a sexual nature; putting them through whipping, beating, branding, calisthenics or exposure to severe weather; or sleep deprivation, "exclusion from social conduct" or extreme embarrassment.

It also establishes tiers for hazing. The least-serious incidents are low-level violations. Hazing that's reasonably likely to injure someone constitutes a misdemeanor, while severe injury or death makes it a felony.

There is a "safe harbor" provision that can insulate people from prosecution if they seek help for victims of hazing incidents.

The Piazzas said they hoped the Pennsylvania law will inspire changes in other states.

"Legislators have given the justice system the tools to punish this egregious behavior and we only can hope they use these tools so that the law becomes a deterrent to prevent other families from having to endure the loss and pain that we have," they said.

The law takes effect next month.