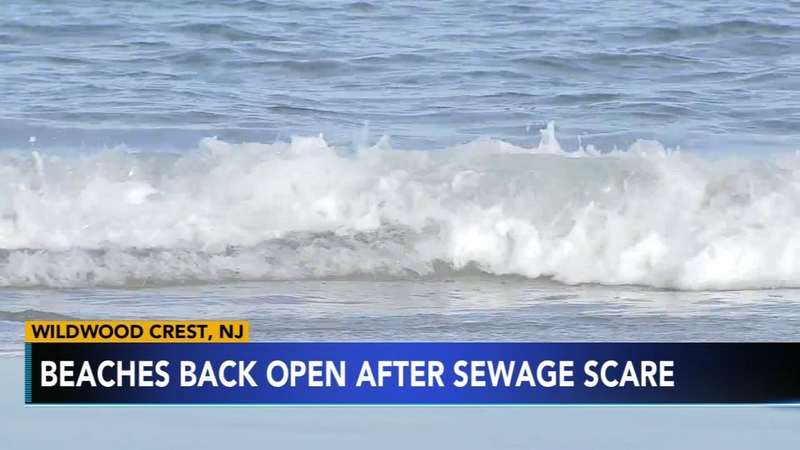 WILDWOOD CREST, N.J. (WPVI) -- The ocean in parts of Wildwood Crest has reopened to the public after what officials called a malfunction at the treatment center.

Don Cabrera, the mayor of the Borough of Wildwood Crest, confirmed to Action News Tuesday morning that the ban has been lifted and the beaches were safe.

The executive director of the Cape May County Municipal Utilities Authority says no bacteria was detected in the water today.

"The results of the Enterococci bacteriological sample collected on July 1, 2019 at 8:58 a.m. from the final effluent dischrged from the Cape May County Municipal Utilities Authority's Wildwood/Lower Wastewater Treatment Facility is reported as non-detectable."

Officials said they discovered Monday morning that the last of three phases in its wastewater treatment system failed to trigger at the Cape May County Municipal Utilities Authority's Seven-Mile Treatment Center.

They believe that happened sometime between Sunday afternoon to early Monday.

The process requires the funneling of treated water through an outfall line that extends a mile into the ocean at Jefferson Avenue.

Joe Davis was on the beach when he heard the lifeguard yell.

"The lifeguards were like, 'Everybody out!' I was like, 'What the heck is going on? Sharks?" said Davis.

"The water was so crystal clear, but it was shocking there's all this bacteria in there," said beachgoer Heather Murphy.

The Cape May County Department ordered to close the ocean from all areas within a one-mile radius of the outfall line.

"There was a treatment of chlorine that didn't happen. It could potentially affect the water quality, or it couldn't," Cabrera said earlier.