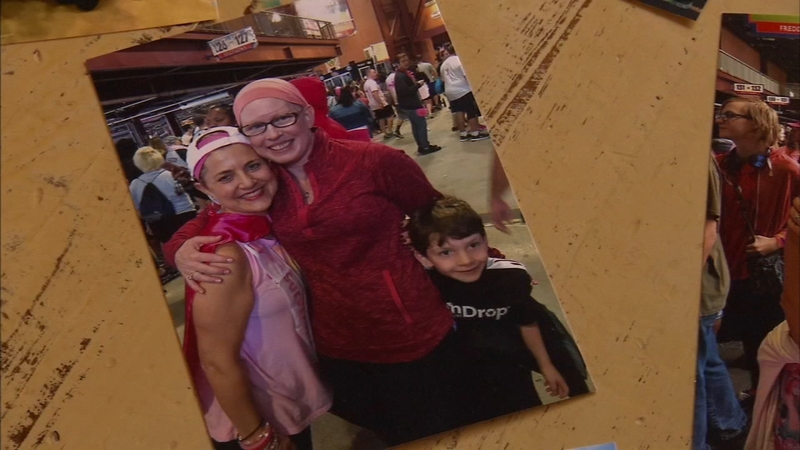 PHILADELPHIA (WPVI) -- Support is a key to success in fighting breast cancer. Sunday, thousands of survivors and their supporters will take part in the annual Making Strides Walk in Pennsauken, New Jersey.

And two "sisters" in pink will be leading their teams, brought together by fate.

Rebecca Capizzi and Carolyn Tucker met 2 decades ago - each roomed with their mutual friend Dana at different times.

But their acquaintance became a special bond when they were diagnosed with breast cancer 3 months apart.

"I just knew I had to call her. I just wanted her to know I was there," said Carolyn.

It was a big step for Carolyn, who'd been keeping her diagnosis to herself.

"I got diagnosed in March. I did not tell most of my friends until August. It was the loneliest 3 months of my life," she said.

But they supported each other through double mastectomies, chemotherapy, radiation, immunotherapy, and reconstruction for the same aggressive type of cancer.

"Everything I was going through, Carolyn was about 2 months ahead of me and she just walked me through everything," said Rebecca.

And each joined the other's Making Strides walks in Philadelphia and New Jersey.

"I decided early on in my diagnosis that I needed to be part of the solution, how big or small that may be," said Carolyn. "I raised like $7000 which, I was shocked."

This year, the two merged their teams, since Making Strides is merging its Philadelphia and South Jersey walks.

"Everyone knows someone that goes through this," said Rebecca.

"I never want people to feel alone, like I did those first 3 months," said Carolyn.

6abc is a partner in the walk, which steps off Sunday morning in Cooper River Park in Pennsauken.