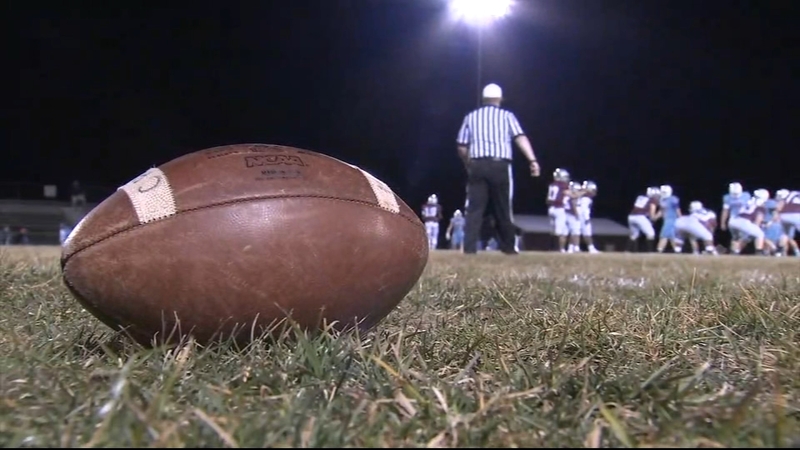 UPPER CHICHESTER, Pennsylvania (WPVI) -- Players, cheerleaders, the band, and fans were back under the Friday night lights in Upper Chichester Township, Delaware County for the first game of a spring football season.

The Chichester High School team played Father Judge High School in the first of a shortened five-week season which replaced the fall season, which was canceled due to COVID-19.

Quarterback and Chichester senior Zach Taylor says he was devastated when he learned the fall season was canceled.

"That's what everyone looks forward to as a kid," said Taylor. "Playing senior year and to have that taken like this is horrible."

Directors from ten high schools banded together to plan a spring season in a new league they call United Ten.

"A big part of these kids' lives were missing, and we're trying to do it as safely as we can and give them some normalcy," said Paul Amand, director of activities at Chichester High School.

This opportunity to play, even just a few games is a blessing, said senior Marquise Fields.

While this is a step toward some normalcy, there are precautions during the games.

The number of fans is restricted, players must wear masks, locker rooms are closed, and practice started just two weeks ago.

Brice says losing a fall season hurt some seniors' chances of being recruited by college coaches and hopes this abbreviated season will help.

"They're having (game) film given to college coaches in a timely manner so they can evaluate them and decide who they want to put on their whiteboard, roster," Brice added.

Brice is most pleased that his young men are back under the lights to make some senior year memories.

Chichester won the Friday night game. Now the United Ten league has four more weeks in its regular season and one week for playoffs.