WPVI
By Nydia Han
PHILADELPHIA (WPVI) -- Earlier this month, the Troubleshooters shined a light on a construction failure of epidemic proportions. Now, we investigate accusations of how some home builders are trying to keep their customers quiet.

If you buy a product and it's faulty, the manufacturer should fix it for you, right? Seems simple. Well, it is far from simple if that faulty product is your home. In fact, you may not even be able to talk about the problem to warn others.

ABC stations across the country found homeowners complaining of shoddy construction and even worse customer service.

As Action News showed you in the Delaware Valley, a major problem with a wide range of builders is related to stucco. 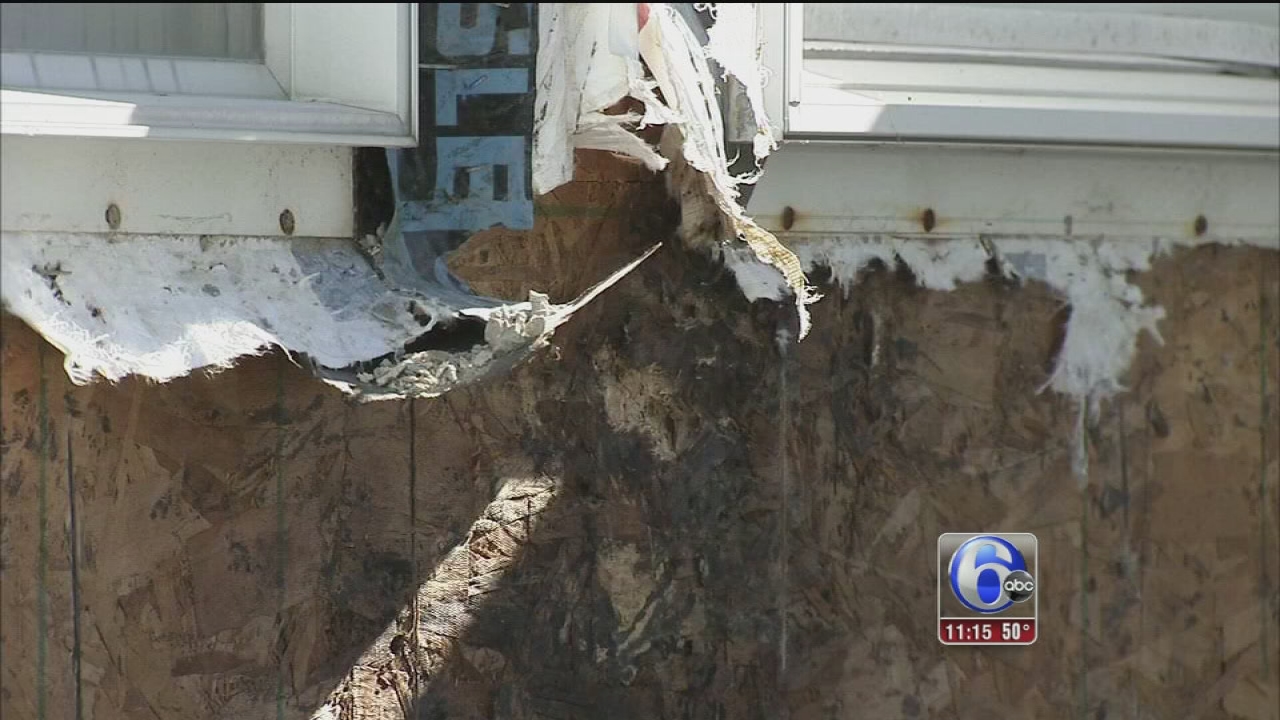 Water gets trapped behind the stucco, rotting homes, and repairs can cost into the six figures.

The Castillos discovered their stucco issue three years ago, and even last year heard this promise: "We'll see if we can get you on the schedule for spring and next summer."

Yet, last month, still no fix.

And the Castillos, like all Toll Brothers customers, signed away their right to sue.

"It's given almost as a bonus or gift when in fact it's taking their rights away," said Amanda Werner, Public Citizen.

A report by Public Citizen shows "arbitration is required by 9 of the 10 biggest (home) builders" in the country.

"They like arbitration because it favors them," said Vicky Pynchon, former arbitrator.

Critics say that is because home builders may provide repeat business to arbitrators.

"So there is this kind of built-in incentive for the arbitrator to please the corporation that they are going to see maybe next week, whereas they will never see these consumers probably ever again," said Werner.

Critics tell us that means consumers tend to get less than they would in court.

Toll Brothers and the building industry dispute the critics.

"I believe that arbitration is a fair and unbiased process, and it's a quicker, less costly process," said Jerry Howard, National Association of Home Builders.

The Castillos say they filed for arbitration. But then after our interview they told us, "We are pleased to report that we have worked with Toll Brothers to resolve our claims."

And Toll Brothers says its policy is to offer repairs with "no strings attached," and "we did exactly that for every homeowner who was interviewed for 6abc's stucco story."

Just prior to the broadcast of our first stucco-related piece, Troubleshooter Nydia Han's inbox was flooded with emails from the Toll Brothers' customers we interviewed - 18 emails, all essentially the same, almost word for word.

"It is important for ABC to know that, prior to our interview with you, Toll Brothers offered to repair our home...," the emails read.

Seem weird? Not when you consider a different email Nydia received. It shows a message that had been sent to one of the Toll customers we interviewed. It says Toll will make full repairs.

But in exchange, Toll demands the following statement be sent to 6abc: "It is important for ABC to know that prior to our interview with you, Toll Brothers offered to repair our home."

And speaking of confidentiality...

Unlike in a court of law, in nearly every state, arbitration and their results are not required to be made public.

"I don't think it's fair," said Ros Castillo of Glen Mills, Pa. when we spoke with her last month, "because the next person buying it doesn't know what happened."

Toll disputes all the claims of arbitration critics.

Toll says its "proceedings are not confidential" and arbitrators are "mutually agreed upon." The company also says it arbitrates only "a handful of claims per year" - in fact, only six in Fiscal Year 2016.

Here is the full statement from Toll Brothers: 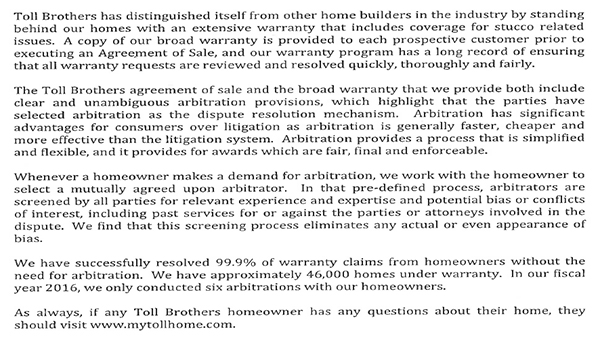 Here is the full statement from the American Arbitration Association:

"The American Arbitration Association (AAA), founded in 1926, is a not-for-profit organization with offices throughout the U.S. The AAA has a long history and experience in the field of alternative dispute resolution, providing services to individuals and organizations who wish to resolve conflicts out of court. In regards to home construction disputes, the AAA's roster of arbitrators is composed of independent arbitrators who have a range of subject matter expertise and experience and include lawyers familiar with construction disputes as well as industry professionals such as architects and engineers. All AAA arbitrators sign an oath agreeing to be bound by a Code of Ethics for arbitrators drafted in conjunction with the American Bar Association that requires impartiality and independence.

In addition, the AAA has a long history of developing rules and procedures, that courts have upheld, and incorporate a number of procedures that promote a fair process including:
- An equal voice among parties in the selection of the arbitrator(s).
- Required disclosures by arbitrators of any potential conflicts of interest or prior service on a case involving the same parties or lawyers.
- The ability to object to the appointment or continued service of an arbitrator with any disclosures.

Statistics on residential construction cases filed and closed for a five year period are made available on our website as part of our Consumer Arbitration Statistics.

A few statistics drawn from the report that may be of interest are:
- There were 1,591 residential construction cases filed and closed with the AAA from October 1, 2012 - September 30, 2016. Homeowners initiated 66% of those cases and builders initiated the remaining 34%.
- Median arbitrator compensation was $1,050 and 184 cases were closed without incurring any arbitrator compensation. Median time from filing to closure was 8.7 months.
- Over 50% of cases are settled or otherwise closed prior to award. Only 46.5% proceeded to an award.
- Of the cases where the arbitrator identified a prevailing party the homeowner was the prevailing party 58.4% of the time. Builders were the prevailing party 38.4% of the time and both the homeowner and builder prevailed in some fashion 3.2% of cases."