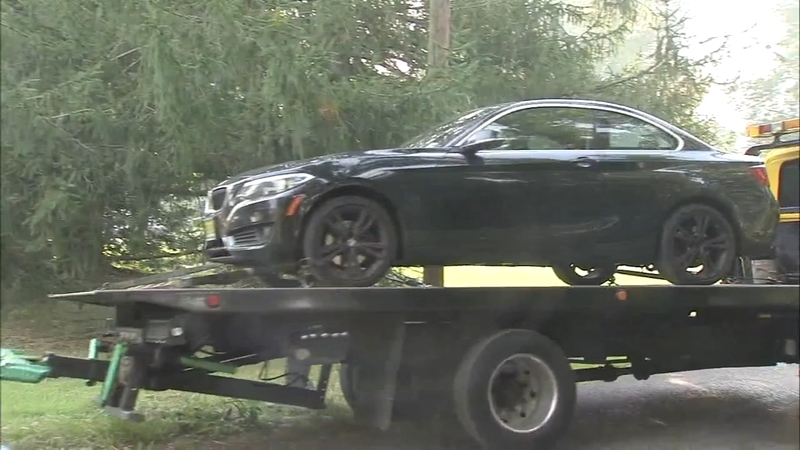 BORDENTOWN, N.J. (WPVI) -- Authorities have executed a search warrant at the Bordentown, New Jersey home of a couple who raised $400,000 through GoFundMe for a homeless Philadelphia man who now claims they mismanaged the cash.

Investigators could be seen searching a BMW in the driveway of the Burlington County home of Kate McClure and Mark D'Amico. The vehicle was then loaded onto a truck outside the home and hauled away.

Police and other investigators could be seen elsewhere on the property.

"Due to the enormous public interest in this matter, I am confirming that a search warrant was executed early this morning by the Burlington County Prosecutor's Office and the Florence Township Police Department at the residence of Mark D'Amico and Katelyn McClure in connection with a criminal investigation into the Johnny Bobbitt matter," Burlington County Prosecutor Scott A. Coffina said in a statement.

"As of this time, there have been no charges filed. Further updates will be provided as circumstances warrant," Coffina said.

D'Amico was also at the home. He was swinging a golf club and playing fetch with a dog. A short time later, McClure got into a car and left the home, but she did not answer reporters' questions.

Investigators execute a search warrant at the home of the NJ couple accused of defrauding a homeless man. Katherine Scott reports from the scene on September 6, 2018.

The couple is being sued by the homeless man, John Bobbitt.

McClure and D'Amico started a GoFundMe account to help Bobbitt, who spent his last $20 to help McClure after she ran out of gas on I-95 last year.

At a court hearing on Wednesday, the lawyer for McClure and D'Amico, Ernest Badway, tried to assert his clients' fifth amendment right against self-incrimination.

The couple was not present.

Judge Paula Dow orders couple to appear in court over a GoFundMe account that raised $400,000 for a homeless man. Watch this video from September 5, 2018.

Judge Paula Dow ordered McClure and D'Amico appear in court next week. Dow told Badway that she had a number of questions about the case and wanted to see the defendants herself.

The couple also must give depositions about the money that was raised for Bobbitt.

The judge also ordered the attorneys for both the couple and Bobbitt to get their paperwork in order, and figure out the money trail to see who spent what on both sides.

The total amount raised would have been $360,000 after GoFundMe's fees.
The couple claimed through their attorney they gave Bobbitt $200,000. Bobbitt pinned the figure at $75,000 in cash, goods, and services.

Bobbitt's lawyer says he's been told all the money is gone. It's unclear what happened to it. McClure and D'Amico have denied wrongdoing.

On a nationally broadcast talk show last Monday, D'Amico said there was $150,000 remaining. Court records reveal that D'Amico allegedly texted Bobbitt after the broadcast and wrote, in part, "Yo, I say I get rid of my team of lawyers, you get rid of yours, and Kate and I write you a check. Seriously."

The text went on to say, "They're gonna put it in a trust man. You're gonna end up with nothing."

From Action News reporter @chadpradelli: According to court filings in the John Bobbitt case, Mark D’Amico sent this text message to Bobbitt right after appearing on a national talk show.

In just a few months, McClure posted pictures and videos of a New Year's Eve Bash in Las Vegas, helicopter rides, trips to New York with front row tickets to a Broadway show, and shopping excursions.

How they paid for the items and trips is unclear. McClure is an administrative assistant with the state of New Jersey who makes $43,000 per year. D'Amico is a carpenter.

The couple has previously denied spending any of the GoFundMe money on themselves.