2 people hurt in fire at Ramada Inn in Vineland, N.J. 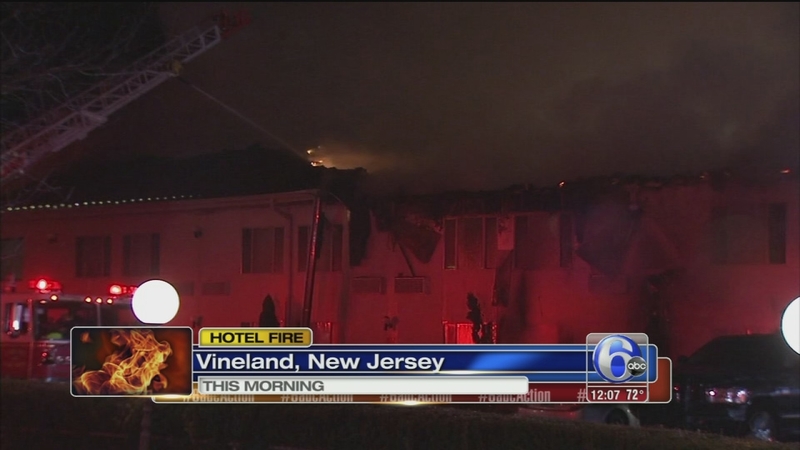 VINELAND, N.J. (WPVI) -- Two people are hospitalized, including a police officer, after a two-alarm blaze that heavily damaged the Ramada Inn in Vineland, New Jersey.

The fire began around 2 a.m. Friday on the 2200 block of West Landis Avenue.

Large flames were showing from the roof of the rear wing of the building when crews arrived.

The flames traveled above in an attic space and throughout the hallways.

"The first thing I do is grab what I could grab, threw some clothes on, grab my bag and get out of there," said guest Marcus Cornwall of Georgia.

Some occupants were attempting to jump and had to be rescued.

The Vineland Fire Chief, Robert Pagnini said, "They were hanging out of windows and throwing their belongings out the windows."

Firefighters realized they were in for a tough fight and called in for extra help from the surrounding areas.

It took them more than two and a half hours to get the blaze under control.

Officials say the fire appears to have started in room 248 on the second floor. That is a smoking room, but it was not known if smoking played a role.

The female occupant of that room was injured in the blaze and has not been able to talk to police.

Meanwhile, the injured police officer suffered smoke inhalation and is expected to be okay.

One guest visiting from Dublin, Ireland spoke to Action News about the scary moments as he got out of the hotel.

"My door gets knocked on, I open the door, it was the police telling us to get out, get out," said Brendan O'Meara.

O'Meara was one of the guests who said it was police and firefighters pounding on their doors that alerted them, not a fire alarm.

"Firefighter guys outside the door said 'Get out,'" said O'Meara. "I didn't hear the fire alarm. That was the amazing thing, there was no fire alarm," he said.

The fire only damaged one portion of the hotel, and the rest was still open as normal on Friday.

In fact, the facility will host a wedding on Saturday.