Grand Bahama waterlogged in Hurricane Dorian before and after satellite photos 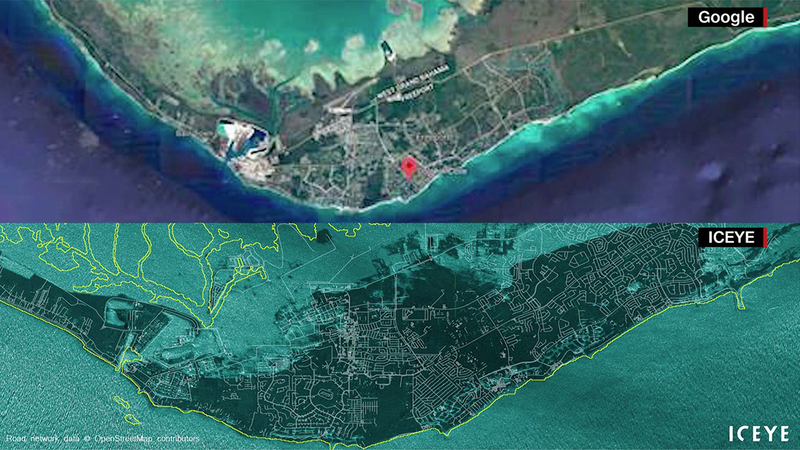 Grand Bahama waterlogged in Hurricane Dorian before and after photos

The imagery provided by satellite-data company ICEYE was taken just before noon local time on Monday as Dorian stalled over the Bahamas.

ICEYE produced the imagery using its next-generation Synthetic-Aperture Radar satellite technology, which is able to penetrate cloud cover and "doesn't require sunlight to provide reliable remote sensing data," according to the company. ICEYE outlined the coastline in yellow and superimposed a street map in white.

Dorian's punishing winds and torrential rain have battered the islands of Abaco and Grand Bahama, which have a combined population of about 70,000 and are known for their marinas, golf courses and all-inclusive resorts. The Grand Bahama airport was under 6 feet of water.

One station said it got reports of a 5-month-old baby stranded on a roof and a woman with six grandchildren who cut a hole in a roof to escape rising floodwaters. At least two storm shelters flooded. The U.S. Coast Guard airlifted at least 21 people injured on Abaco. Rescuers also used jet skis to reach some people.

Aerial footage obtained exclusively by AccuWeather shows utter devastation in Marsh Harbour, one of the first places in the Bahamas that was ravaged by then-Category 5 Hurricane Dorian.

"We will confirm what the real situation is on the ground," Health Minister Duane Sands said. "We are hoping and praying that the loss of life is limited."

Tammy Mitchell of the Bahamas' National Emergency Management Agency told ZNS Bahamas radio station that authorities had documented every call and were prioritizing them, but that rescue crews were forced to turn back in some cases because the wind was so fierce and the water so high.