Motorists expressed their anger on social media as they sat in vehicles, unable to move and worried about the falling temperature.
CNNWire
By Kelly McCleary and Joe Sutton, CNN 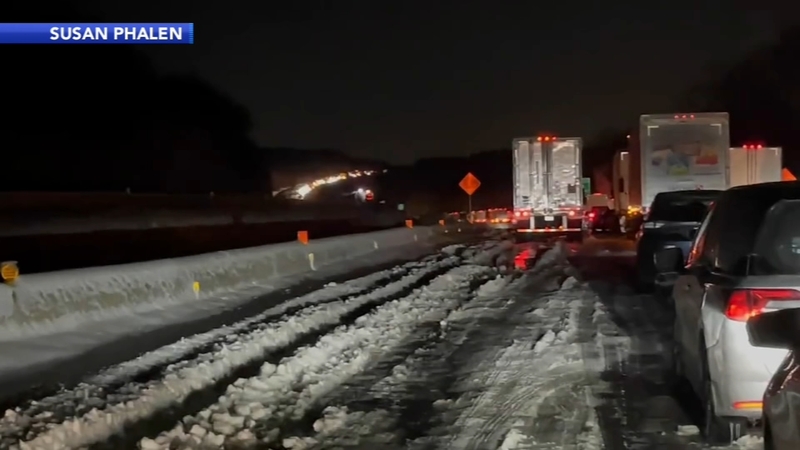 FREDERICKSBURG, Virginia -- Drivers have been stranded for hours on a major interstate in eastern Virgina -- some stuck from Monday into Tuesday morning -- after a severe winter storm caused massive backups, sending authorities scrambling to clear a path.

In some places in the Fredericksburg area, vehicles still were stranded shortly before sunrise Tuesday partly because of disabled trucks, and some travelers have been stuck since Monday morning, the Virginia Department of Transportation said.

On I-95 southbound in Stafford, traffic is blocked near exit 136 (Centreport Pkwy.) area due to struck/disabled trucks. VDOT crews traveling north in I-95 southbound lanes, south of Centreport, to get to scene for plowing + treating of interstate. pic.twitter.com/css2FkpsEM

The stuck vehicles were on portions of I-95 between exit 104 near Carmel Church and exit 152 at Dumfries Road -- a roughly 50-mile stretch that runs though Fredericksburg between Richmond and Washington, DC.

That 50-mile stretch was closed Tuesday morning so workers could remove stopped trucks treat the road for icing, VODT said.

Motorists expressed their anger on social media as they sat in vehicles, unable to move and worried about the falling temperature after a storm that dropped several inches of snow across the Mid-Atlantic and Southeast and left more than 400,000 customers without power.

Susan Phalen and her four dogs still were stuck in her vehicle on I-95 just south of Stafford around 6:15 a.m. Tuesday, having left her home in Fredericksburg around 8 p.m. Monday. Her trip was supposed to last only an hour, Phalen said.

4:59am on I-95 North just south of Stafford, VA. No movement in either direction for over 9 hours (much longer for many others). But there are now flashing lights way up ahead in the northbound lanes. @VaDOTFRED ??
Got any updates for us? pic.twitter.com/BgCvLMlJwY

"This one for the record books," she told CNN. "I could have walked there faster."

A few cars behind her, she said, was a man who said he'd started a trip at 5:30 a.m. Monday and was trying to get to Long Island.

Video shows the icy traffic nightmare unfoldiing on I-95 between Washington, DC and Richmond, Virginia.

VDOT workers were working Tuesday morning to clear stopped trucks and treat the road for snow and ice "to ensure that when the lanes reopen, motorists can safely proceed to their destination," VDOT Fredericksburg engineer Marcie Parker said.

"This is unprecedented, and we continue to steadily move stopped trucks to make progress toward restoring lanes," Parker said.

"As VDOT removes disabled vehicles, and plows/treats road to make it safe for passage as they are removed, (Virginia State Police) troopers will reach each driver," VDOT said.

The Fredericksburg area received at least 14 inches of snow from the storm, according to the National Weather Service in the Baltimore/Washington area. Fredericksburg sits between Richmond, Virginia, and Washington, DC.

An estimated 20 to 30 trucks were stuck on I-95 northbound near the Thornburg exit, according to VDOT, which said towing crews were on the scene.

On the southbound side, stuck and disabled trucks were blocking traffic on the interstate in Stafford, VDOT reported.

On I-95 southbound in Stafford, traffic is blocked near exit 136 (Centreport Pkwy.) area due to struck/disabled trucks. VDOT crews traveling north in I-95 southbound lanes, south of Centreport, to get to scene for plowing + treating of interstate. pic.twitter.com/css2FkpsEM

"We know people have been stopped for extraordinary time periods leading up to these closure areas, but we are clearing trucks one by one to break through this blockage, and we will get to each driver and restore traffic flow," Kelly Hannon, spokesperson for the VDOT Fredericksburg District, told CNN.

"Crews continue to work intensely to tow vehicles that are stuck and blocking the interstate near mile markers 136 in Stafford County, and then plow and treat the interstate to prevent follow-on crashes," Hannon said. "This is also occurring where traffic remains stopped on Interstate 95 northbound at mile marker 117 in Spotsylvania County."

Power outages have knocked out traffic cameras in the area of I-95 near Fredericksburg where travel is stalled, hindering VDOT's response, Hannon said.

CNN en Español correspondent Gustavo Valdés was among those stuck in traffic. He said when he stopped for gas around 6 p.m., his GPS said he was two hours from Washington. By 1 a.m. Tuesday, he still hadn't arrived.

Valdés said he exited the highway near Quantico, Virginia, but the side roads were also jammed. Route 1A, which runs parallel to I-95 in the area, was blocked by jackknifed trucks, which were preventing snowplows from getting through.

Valdés said he considered pulling to the side of the road to spend the night in his car because he couldn't find an available hotel room, but traffic had started moving again.

Some four-wheel-drive vehicles helped create new paths through the snow for other vehicles to follow, he said.

While traffic was snarled on the interstate, drivers were also urged to stay off local roadways as dozens of traffic signals were out of service due to power outages, officials said.

More than 50 traffic signals are currently out of service across the Fredericksburg area due to power outages. While we urge motorists to remain off the roads overnight, please be guided by the following if you encounter a traffic signal out of service: pic.twitter.com/Jl1kl7UPDc

More than 400,000 customers were in the dark Tuesday morning from Georgia to Maryland, with nearly 300,000 outages reported in Virginia alone, according to PowerOutage.US.

Further north on I-95, federal government offices in Washington, DC, are opening with a three-hour delay Tuesday after being shuttered Monday due to the weather. The district recorded 8.5 inches of snow Monday, the heaviest one-day snow total since January 2016, CNN meteorologist Brandon Miller said. Capitol Heights, Maryland, recorded 11.5 inches of snow and Baltimore/Washington International Airport reported 6.7 inches.
It could take several weeks for all that snow to melt, CNN meteorologist Pedram Javaheri said, explaining that the white layer of snow cover reflects sunlight, essentially acting as a coolant that prevents the ground surface from warming enough to melt it.

On average, it takes about three days of temperatures above 50 degrees for about 2 to 4 inches of snow to melt, Javaheri said, and the Washington area is forecast to stay below that mark through at least the end of the week.

Three deaths were reported in Maryland after an SUV with four occupants collided with a snowplow, according to Shiera Goff, spokesperson for the Montgomery County Police Department. Two women and one man were pronounced dead at the scene, Goff said, and a fourth victim, a man, was taken to an area hospital where he is in critical condition.

The investigation into the cause of the collision is ongoing, Goff said.

The ground in the area was saturated by recent rainfall, Daniels told WSB. The NWS in Atlanta warned of possible wind gusts from 40 to 50 mph Monday morning.

A large swath of winds gusting from 40-50mph are possible through the mid-morning hours. Stronger wind gusts are possible across the ridge lines in the north Georgia mountains. Winds could move unsecure objects, down trees and limbs, and cause power outages. 🌬️ #gawx pic.twitter.com/eADCulz2NB

And in Tennessee, a 7-year-old girl died early Monday morning when a tree fell on her home in the Knoxville area, the Blount County Sheriff's Office told CNN affiliate WVLT.

"There are trees down all over the county, particularly here in Townsend, because we are right at the foothills of the Great Smoky National Park," BCSO Public Information Officer Marian O'Briant told WVLT. "There are a lot of trees; it was kind of a wet heavy snow, so trees are still falling right now."

CNN has reached out to DeKalb County Fire Rescue and the Blount County Sheriff's Office.

In Atlantic City, 9.5 inches of snow was reported.

Southwestern New Jersey received between 1 and 4 inches of snow, while the southeastern part of the state got somewhere between 6 to 11 inches, Gov. Phil Murphy said.