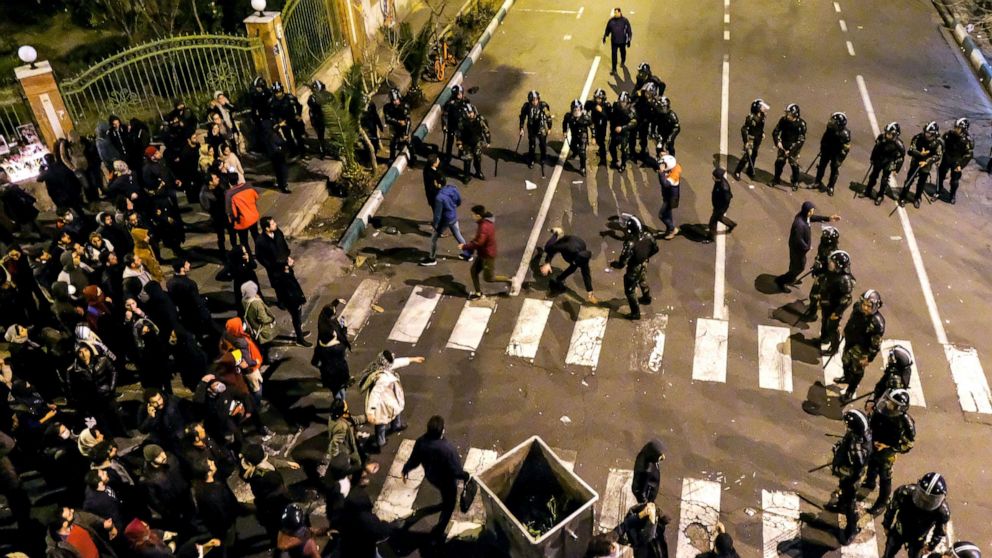 LONDON -- Anti-government protests turned violent in Iran over the weekend as security forces opened fire on demonstrators after the shooting down of the Ukrainian passenger plane that killed all 176 people on board.

Despite initially claiming Ukraine International Airlines Flight 752 crashed because of a technical fault, the Iranian government admitted the plane was shot down by an anti-aircraft missile because it was mistaken for a "hostile flight" Saturday morning.

130 people holding Iranian nationality were among those killed on the plane.

The plane was shot down hours after Iran fired missiles into Iraq in retaliation over the U.S. drone strike that killed Qassem Soleimani, a top general in the Iran Revolutionary Guard Corps (IRGC).

The admission that the plane was shot down saw a public vigil held at 5 p.m. at the Amirkabir University in Tehran Saturday evening, which soon spiraled into an anti-government protest. An estimated 1,000 people attended the protests.

Crowds chanted "down with the deceptive government" and called for the release of all political prisoners.

Riot police were later deployed and the protest was broken up.

The U.K. Ambassador to Iran was arrested and briefly detained after attending the vigil at Amirkabir University on Saturday in a move condemned by the British government.

"The arrest of our Ambassador in Tehran without grounds or explanation is a flagrant violation of international law," the British Foreign Secretary Dominic Raab said in a statement. "The Iranian government is at a cross-roads moment. It can continue its march towards pariah status with all the political and economic isolation that entails, or take steps to deescalate tensions and engage in a diplomatic path forwards."

The protests continued on the streets of Tehran Sunday with security forces reportedly shooting live rounds and tear gas to disperse hundreds of demonstrators at Freedom Square.

President Trump tweeted his support for the protesters in both English and Farsi, saying: "To the leaders of Iran - DO NOT KILL YOUR PROTESTERS. Thousands have already been killed or imprisoned by you, and the World is watching. More importantly, the USA is watching. Turn your internet back on and let reporters roam free! Stop the killing of your great Iranian people!"

Video footage sent to the Center for Human rights in Iran, verified by the Associated Press, showed the aftermath of the incident with protesters fleeing the scene and one woman apparently was shot in the leg. Other footage showed pools of blood near the woman.

Footage circulating on social media showed the protesters deliberately avoiding trampling on Israeli and U.S. flags, just days after millions of Iranians took to the streets to mourn the killing of General Soleimani.

However, a separate pro-government protest took place outside the British and Israeli embassies Sunday with an estimated 300 people in attendance.

Hardliners within the Iranian government have warned against holding more large-scale vigils to mourn the passengers of the downed Ukrainian airliners. Further vigils were scheduled in Tehran on Monday but were called off due to a heavy police presence.

The scenes recall the anti-government protests across Iran in November which saw at least 300 people killed and thousands arrested across the country, according to Amnesty International.

The anti-government protests come just days after millions of Iranians took to the streets to mourn the death of Soleimani, although they were protesting for completely different reasons.

General Salami, the current commander of the IRGC, officially apologized to the people of Iran and said that the government had not been informed that the plane was shot down until Friday evening. Many protesters, however, were angry not just about the mismanagement that led to the downing of the passenger plane, but because they believe they were lied to for three whole days.