The deal between the 76ers and the Nets also includes two first-round picks.
ESPN
By Tim Bontemps, ESPN 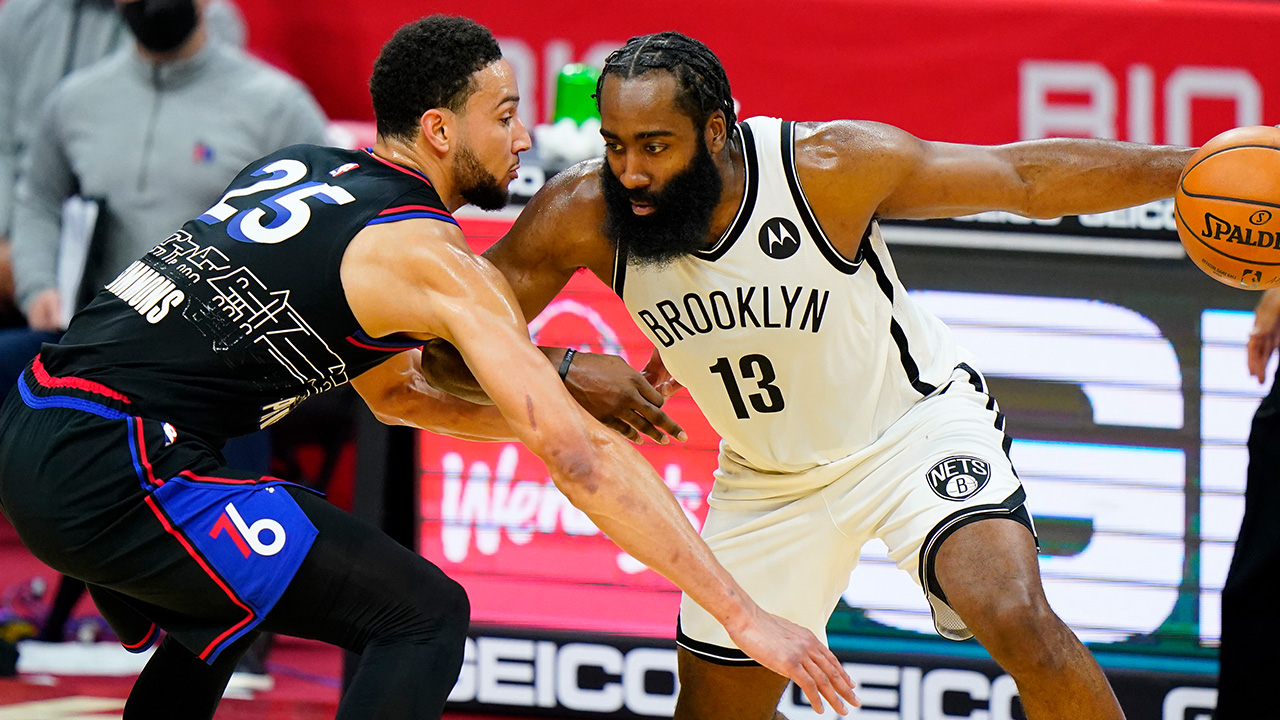 James Harden-Ben Simmons deal solves 2 Sixers' problems with one deal
Daryl Morey finally put an end to the Ben Simmons' saga, while finding a top-flight running mate for star Joel Embiid.
Brooklyn will receive Philadelphia's unprotected 2022 first-round pick, with the right to defer it to 2023, as well as a top-8-protected 2027 first-round pick, according to Wojnarowski. That pick would remain top-8 protected in 2028, and will turn into two second-round picks -- and $2 million in cash -- if it doesn't convey in either season.

"James Harden is one of the truly elite players in the league. His career has been defined by incredible personal achievement, including honors as NBA MVP and three-time NBA scoring champion," Philadelphia 76ers Managing Partner Josh Harris said. "We're thrilled to pair him with Joel Embiid and this dynamic roster in our pursuit of an NBA title. I am proud to welcome James and Paul Millsap - a proven veteran and former All Star - to the 76ers, and can't wait for what the future holds for the city and our fans."

The deal allows both teams to move on from unhappy superstars who had been seeking trades.

For Philadelphia, it means the end of what has been a monthslong saga surrounding Simmons, who asked to be traded shortly after the Sixers lost to the Atlanta Hawks in the second round of the Eastern Conference playoffs last year.

Outside of a brief cameo at practice in mid-October in the middle of training camp, Simmons hasn't been around the team since and has not played in a single game this season. Sources told ESPN's Ramona Shelburne that Simmons will continue to work with his therapist to get mentally ready to play in Brooklyn.

"It's a work in progress," one source close to Simmons told Shelburne.

Simmons has already talked to Nets star Kevin Durant and general manager Sean Marks, his agent, Rich Paul, told Wojnarowski. Simmons is eager to join the Nets and ramp up for a return to play this season, according to Paul.

"We've got to work to do to get him back to play, but it's a great step in right direction," Paul told Wojnarowski.

The relationship between Harden and the Nets, meanwhile, broke down in recent days, with sources telling Wojnarowski that Harden had declined to formally ask for a trade, fearing the backlash of doing so for the second time in a little more than a year.

But after the Nets traded four first-round picks and three swaps, plus center Jarrett Allen and Caris LeVert, a little over a year ago after Harden forced his way out of Houston following eight-plus seasons with the Houston Rockets, the former league MVP is now on his way again.

Harden has exercised his $47.4 million player option for the 2022-23 season as part of the trade, a source confirmed to ESPN's Bobby Marks. The 10-time All-Star is eligible to sign a four-year, $223 million extension with Philadelphia in August.

The 76ers canceled practice Thursday afternoon, with coach Doc Rivers saying it was the "human" thing to do, given all the noise that had surrounded his team over the past several months.

"It was strange," Rivers said. "I canceled practice. There's just so much stuff that's gone on, so many rumors. I just thought the human thing to do instead of the coaching thing was just to be very straightforward with our guys and tell them I get it. Everybody's names and all this stuff.

"So we'll do shootaround tomorrow with our team, guaranteed."

That team will now include Harden and Millsap but will not include Simmons or Curry, who also happens to be Rivers' son-in-law. Curry is averaging 15 points and 4 assists per game while shooting 40% from 3-point range, and has developed strong chemistry with Philadelphia superstar center Joel Embiid.

But that wasn't enough to prevent a deal from taking place. The inclusion of Curry allows the 76ers to retain their two premium young players, guard Tyrese Maxey and third-year forward Matisse Thybulle. Drummond will give Brooklyn some additional size inside, something the Nets have lacked on their roster this season.

Brooklyn, sources told Wojnarowski, continues to be engaged on deals ahead of the deadline as it continue to reshape its roster.

Philadelphia, meanwhile, can finally move forward with the Simmons situation behind them -- and with Harden reunited with 76ers president of basketball operations Daryl Morey, who traded for him in Houston.

The Nets remained the consensus favorites to win the NBA title after Thursday's trade. Caesars Sportsbook kept the Nets at 4-1 to win the championship, while shortening the 76ers from 12-1 to 7-1.

Other oddsmakers, however, dropped Brooklyn back in their NBA title odds. The SuperBook at Westgate Las Vegas moved the Nets from 6-1 to 10-1 on Thursday. The SuperBook has the Golden State Warriors and Phoenix Suns as co-favorites to win the title, each at 9-2. The 76ers and Milwaukee Bucks are next, each at 6-1. The Nets are the favorites at the majority of sportsbooks.

The 76ers sit 1.5 games out of first place in the Eastern Conference, and Rivers said that was a credit to his players for how they've handled everything that has happened.

"They were great. They all were great. We did watch a little bit of film, we had a lot of laughs together, and I told them about our team and how proud I was of where we were at to this point," he said. "I think a lot of people thought before this year without having our All-Star, our other All-Star, we wouldn't be in this spot, and we are a game-and-a-half out of the top spot, and that's why in return I thought today, from a coaching standpoint, the right thing to do was to allow you guys to have your day.

Where they're at is with James Harden -- and without the future of Ben Simmons hanging over them.