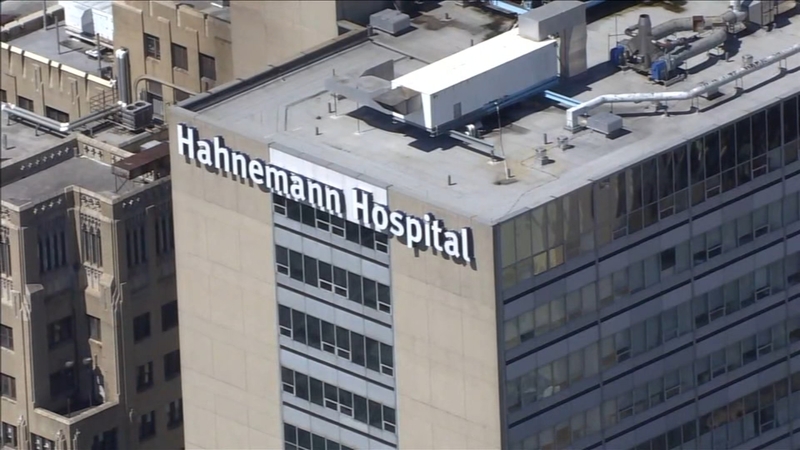 PHILADELPHIA (WPVI) -- Philadelphia city leaders and the owner of the former Hahnemann University Hospital are at odds during negotiations to reopen the facility for coronavirus patients.

Philadelphia Managing Director Brian Abernathy and city leaders are accusing Joel Freedman, the owner of Hahnemann, of trying to make money off the coronavirus pandemic, as the number of positive cases grew to 342 on Wednesday.

Freedman pushed back and said the amount he's asking for to rent the building is well below market price.

The hospital located at Broad and Vine streets in Center City has been closed since September.

The city and Freedman are now negotiating a six-month lease to use the building to help with coronavirus treatment.

As it stands now, Freedman is asking for more than $400,000 a month, but city leaders say that's unreasonable.

"I think he is looking at how to turn an asset that is earning no revenue into an asset that earns some revenue and isn't actually particularly thinking through what the impacts are on public health," Abernathy said.

Freedman fired back, claiming the price is eight times lower than the rental cost of a hospital in Los Angeles that's being used for coronavirus patients.

"The space is necessary for us to continue to build out additional surge space and additional quarantine and isolation space and I'm cautiously optimistic that we'll find a path forward, but I hope that the owners will be more reasonable in future negotiations," said Abernathy

Eminent Domain was created for situations like #Hahnemann. This is a public health emergency and Philly is the largest city in the nation WITHOUT a public hospital.

We cannot allow unconscionable greed to get in the way of saving lives. Eminent domain this property. https://t.co/OIlHFtkQrO

"Eminent Domain was created for situations like #Hahnemann. This is a public health emergency and Philly is the largest city in the nation without a public hospital. We can not allow unconscionable greed to get in the way of saving lives. Eminent domain this property."

Freedman said in a statement:

"Our team immediately responded to the City's interest in the Hahnemann and has been engaged in discussions with them for several days. Further, we have continually asked the City to make us an offer for the facility. We asked the City whether they desired to buy or lease the hospital, and after days of waiting for a reply, we took the initiative and submitted a term sheet. We offered to lease the facility to the city for six months or a year, whatever they think is necessary. We need the City to work with us for everyone to be successful," said Freedman. "I believe everyone has the right purpose at heart. The ball is in the City's court to tell us what it needs and is willing to do."

In a press conference Tuesday, Pennsylvania Secretary of Health Dr. Rachel Levine said she thought reopening Hahnemann University Hospital would be "unlikely, given the state of the facility."

Dr. Rachel Levine fields questions about the reopening of Hahnemann during the COVID-19 pandemic

Levine said since Hahnemann has already been closed for six months, it would be "difficult to stand up such a facility."

Ultimately she said the decision on what to do regarding Hahnemann as a possible treatment site would be reached in conjunction with city leaders.
Report a correction or typo
Related topics:
businessphiladelphiahahnemann university hospitalcoronavirus
Copyright © 2021 WPVI-TV. All Rights Reserved.
TOP STORIES
Frontier Airlines: 'We are supporting' crew who restrained passenger
"Hands are tied" dealing with teens at NJ shore, police captain says
New details revealed in crash that killed 4 family members
Man dies after shooting in parking lot of gentlemen's club
450,000 bees found inside walls of Montco home
Simone Biles reveals aunt died suddenly 2 days before competition
CVS will raise its minimum wage to $15 an hour
Show More
Governors in NJ, Pa. call on Cuomo to resign: 'We are appalled'
Not all of MLK Drive reopening to traffic; closures remain for years
Upper Merion teachers, staff must be vaccinated or tested twice weekly
AccuWeather: Some sun inland today, showers at the shore
2 injured in Conshohocken incident
More TOP STORIES News