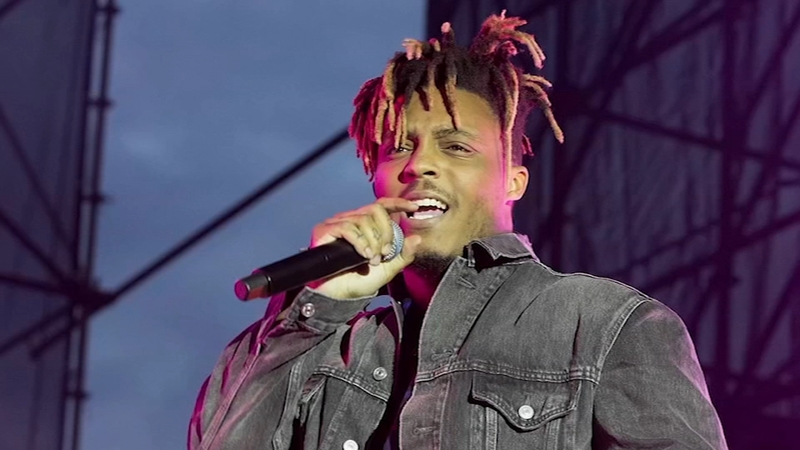 CHICAGO -- An autopsy to determine the cause of the unexpected death of Chicago-born rapper Juice WRLD at Midway Airport Sunday was inconclusive.

The Cook County Medical Examiner's office said additional tests and studies are required to establish the cause and manner of the rapper's death, including cardiac pathology, neuropathology, toxicology and histology.

The up-and-coming rapper died after suffering cardiac arrest at a private hangar at Midway, authorities said. He reportedly had a seizure.

Paramedics were called shortly after 2 a.m. after the 21-year-old rapper, whose real name is Jarad Higgins, arrived in Chicago on a private jet. He was taken to a local hospital, where he was pronounced dead.

Police said there are no signs of any foul play and were awaiting the results of the autopsy.

Chicago police said they were called to Midway Airport to assist federal authorities just after 1:30 a.m. Sunday after a private jet arrived at the airport they said contained a large quantity of narcotics.

Police said the plane's occupants were in the lobby with their luggage in two carts. K9 units from the Illinois State Police searched the luggage, and alerted officers to narcotics in two of the suitcases. Police said a search of the luggage turned up 41 bags of suspected marijuana and six prescription bottles of suspected liquid codeine, as well as three guns.

Police said none of the occupants of the plane would claim ownership of the luggage.

Police said it was during this time that Higgins suffered a medical emergency, which they described as a seizure. Police said a Homeland Security officer administered Narcan, but he was later pronounced dead.

Police said Henry Dean, 27, who identified himself as private security, had a valid FOID card and Conceal Carry License, but police found a high-capacity magazine in his possession. He is charged with one count of Possession of a High Capacity Magazine and metal Piercing Bullets, and two misdemeanor counts of Carry or Conceal a Firearm in the airport.

Christopher Long, 36, was charged with one misdemeanor count of Unlawful Use of Weapon/Carry or Possess.

The Cook County Medical Examiner's Office said they will release a statement when the rapper's cause and manner of death are determined.

Higgins grew up in Chicago's south suburbs and graduated from Homewood Flossmoor High School in 2017. He rose to fame quickly, and as his star was rising, he attended various charitable events, including with the group 100 Black Men of Chicago.

"He was always figuring out ways to give back to our organization because he felt we gave so much to him," said board chairman Carl H. Tutt.

With them, he attended various charitable events and never forgot where he came from. At their 21st annual toy drive, 100 Black Men of Chicago took a moment to remember him.

"When they asked him what organization he wanted McDonald's to support, he immediately said 100 Black Men of Chicago," Tutt said. "And through his philanthropic events we were able to get a sizable donation from McDonald's Corporation."

"For this to happen yesterday, I just feel so bad and so sad for the family and what they are going through," he added.

He was known to work with artists such as Travis Scott and Lil Yachty.

Chicago rapper and activist Chance the Rapper said, "Millions of people, not just in Chicago but around the world are hurting because of this and don't know what to make of it."

Interscope Geffen A&M Records released a statement, saying "Juice made a profound impact on the world in such a short period of time. He was a gentle soul, whose creativity knew no bounds, an exceptional human being and artist who loved and cared for his fans above everything else. To lose someone so kind and so close to our hearts is devastating. Our thoughts are with Juice's family and friends, everyone at his label Grade A, and his millions of fans around the world."

Fans are also mourning the artist who many say was just at the beginning of a successful career.

"It was really touching, young up-and-coming artist from Chicago really, you know, just kind of making his way, and this happens," said fan Lania Sibley.

"I know his music touched a lot of people so hearing he was so young and passed at such an unfortunate way is very saddening," said Robyn Echols.