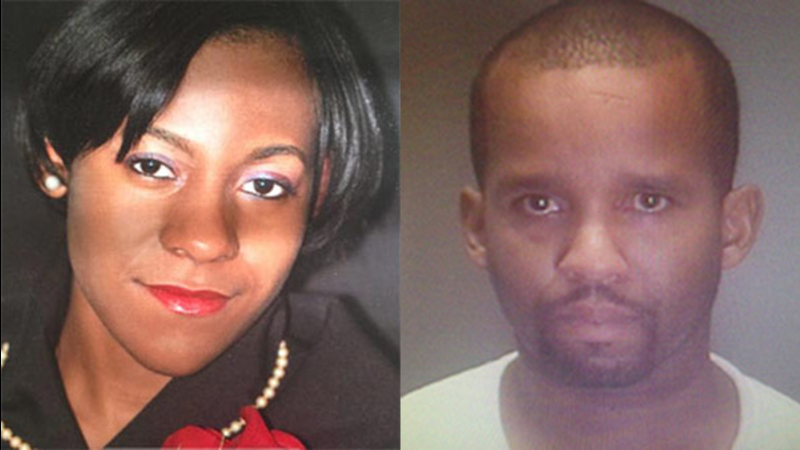 GERMANTOWN (WPVI) -- Philadelphia police say the victim of an abduction in Germantown Sunday night remained courageous which helped lead to her rescue and the arrest of her suspected kidnapper.

Police sources say while authorities initially thought Carlesha had kicked out the windows of the suspect's car, it appears she smashed the windows with a hammer she found in the backseat.

She also apparently hit her abductor in the head with the hammer, but he was able to subdue her.

Sources say she also gave the suspect, 37-year-old Delvin Barnes, her debit card and pin, hoping it would help authorities find her.

"This is one of more memorable cases. It feels good to help out and have a good ending," Sloan said.

Sloan also said Carlesha deliberately dropped her cell phone on the ground during her kidnapping in order for police to know she had been abducted.

That cell phone was discovered by a witness, Dwayne Fletcher, who Sloan calls a hero.

"He witnessed it, he watched, he called the police twice. If it wasn't for him, I don't think we'd have the same outcome. This man is a hero," Sloan said. 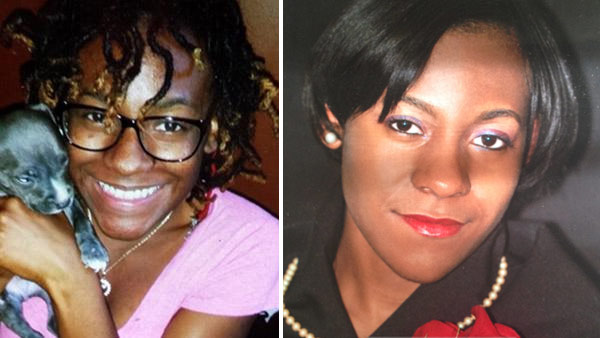 VIDEO: Abduction rescue
Carlesha Freeland-Gaither is back home and her alleged abductor is in custody.

In the end, surveillance video and the suspect's car were the keys that broke the case.

Police in Virginia recognized the man in the surveillance video as a suspect in a similar case.

They had been looking for Barnes for allegedly raping and trying to kill a 16-year-old girl.

Police also captured an image of the suspect's car and were able to read the name of a dealership.

They called the dealership and had them activate a GPS they had installed on the car in case Barnes defaulted on his loan.

Once they found Carlesha, Sloan called the victim's family to alert them of the good news.

First, he spoke with her sister.

"I said why do you sound so gloomy? Why don't you start cheering? Because we found your sister and she's safe. Put your mother on the phone," Sloan said.

He then told her mother, Keisha Gaither, they found her daughter.

It was a promise he made her days earlier.

The detective was asked if he believed it himself.

"I won't say something if I don't believe it," Sloan said.

Philadelphia police are continuing to track Barnes' movements in the hours and days before the abduction.

They believe he may have been involved in a robbery in the Northeast last week.

And they're going back further than that.

The FBI has questioned Barnes and they searched his car Thursday.

They are now the lead agency on the case.

It will be at least a year or more before Barnes is returned to Philadelphia.

He faces trial in Virginia on the rape and attempted murder charges.

Then he will be tried in federal court on the Philadelphia kidnapping and related charges.

"Bottom line is, it doesn't matter, he's not getting out of custody whichever direction he goes, in Philly or Virginia. His last moment of freedom was last night," Ramsey said.

Carlesha's family have been visited by detectives Thursday afternoon.

She will also be interviewed by the FBI in the days to come.

"Everybody came through," the victim's cousin, Cinquetta Barfield, told Action News. "The media, the public - they called in with crazy tips. Everybody just came through, and we all worked as a team."

The dramatic resolution to the 3-day-long ordeal was announced just after 7:00 p.m. Wednesday at a news conference. 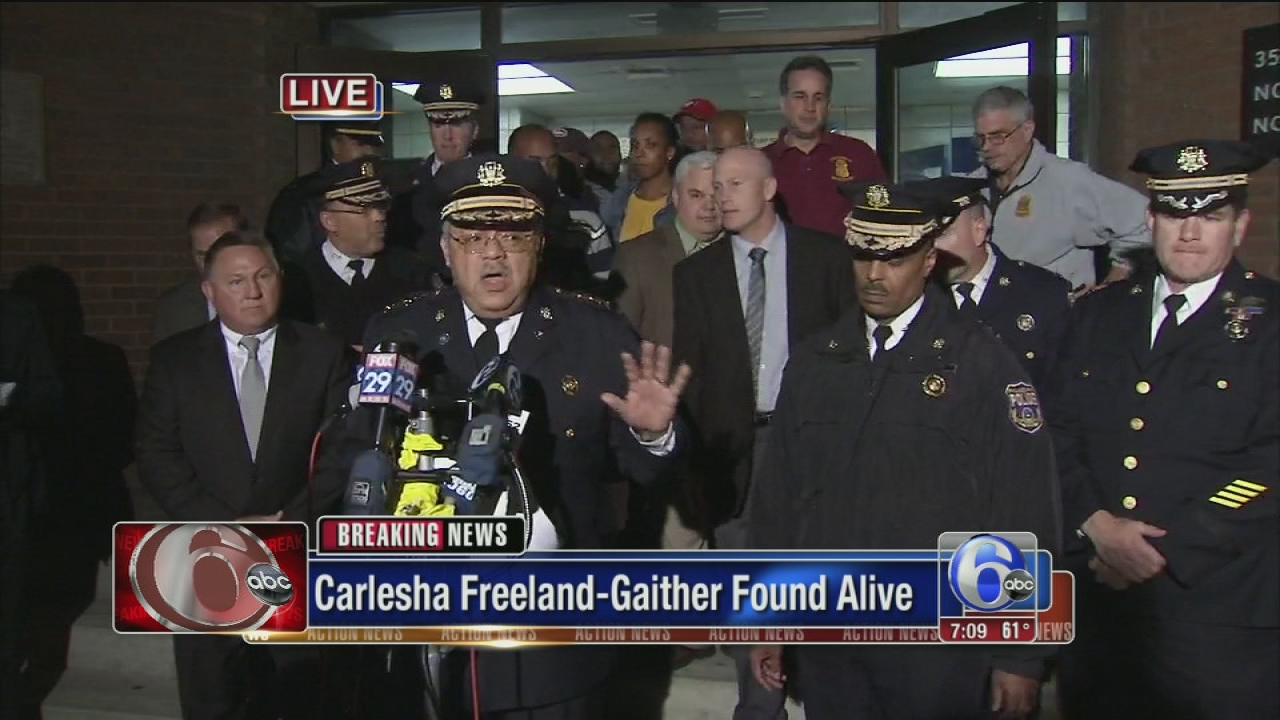 Ramsey and FBI Special Agent Ed Hanko were surrounded by a host of law enforcement officials and the victim's family.

"Tonight, the FBI and Philadelphia Police Department have great news - that Carlesha Freeland has been rescued," said Hanko. "Her abductor has been arrested in Maryland."

Investigators said, a task force from the Baltimore FBI office consisting of U.S. Marshals, ATF agents, and FBI agents, located the car that matched the description of the vehicle used in Freeland-Gaither's abduction.

FBI Agent Timothy Jones said a tip led them to the car, which was located in the parking lot of a shopping center just off I-95 in Jessup, Maryland.

Plastic was covering the window that police believe Freeland-Gaither smashed during her abduction. Agents were able to get a clear view of a man and woman sitting inside the car.

Agents say both were sitting on the passenger side at first, but then Barnes moved into the driver's seat.

"For fear of him driving away before we could detain him and determine that was actually our abduction victim, the agents, at that point, moved in," said Jones.

Jones says the agents surrounded the vehicle and were able to subdue and arrest Barnes without incident.

"It was fantastic because I was actually on the phone with the detective from the Philadelphia Police Department, and it was one of those moments where we were very happy that luck was in our favor," said Jones.

Freeland-Gaither was rushed to nearby Howard County General Hospital in Columbia, Maryland to be evaluated. She was released early Thursday and is now recovering with her family in Philadelphia.

"She's all right. She's ok, excited to be home with her family," her sister's boyfriend Charles Poulson said outside the family's home.

Philadelphia Police Inspector James Kelly spent about 20 minutes inside the home with the family Thursday afternoon.

Her family says Freeland-Gaither worked as a nurse and had spent the evening visiting with her godson before heading home.

They say she had just gotten of a bus and was just blocks from her home when she was abducted.

Surveillance video shows the first moments when Freeland-Gaither came in contact with the large man who took her.

The man is seen reaching his hand out to her on the 5400 block of Greene Street and Freeland-Gaither slowly backing away.

She tries to get around the man again, and that's when he lunges and grabs her. The two then disappear from view.

Surveillance video from another camera shows Freeland-Gaither being dragged down the 100 block of West Coulter Street then shoved into a dark gray metallic 4-door Ford Taurus with Maryland tags.


At Wednesday night's news conference, the victim's mother, Keisha Gaither, thanked the Philadelphia police, the FBI, the public, and her family and friends for finding her daughter.

The police say it was a full court press from the start.

"The detective on this case recovered the video very quickly, got the FBI involved right away, and we started really running on this hard from the very, very beginning," Ramsey said.

The last of those videos was released Wednesday morning, hours before Barnes' arrest.

It shows a man walking into an ACME supermarket in the Fox Chase section of Philadelphia on November 2nd, the same day Freeland-Gaither was abducted. 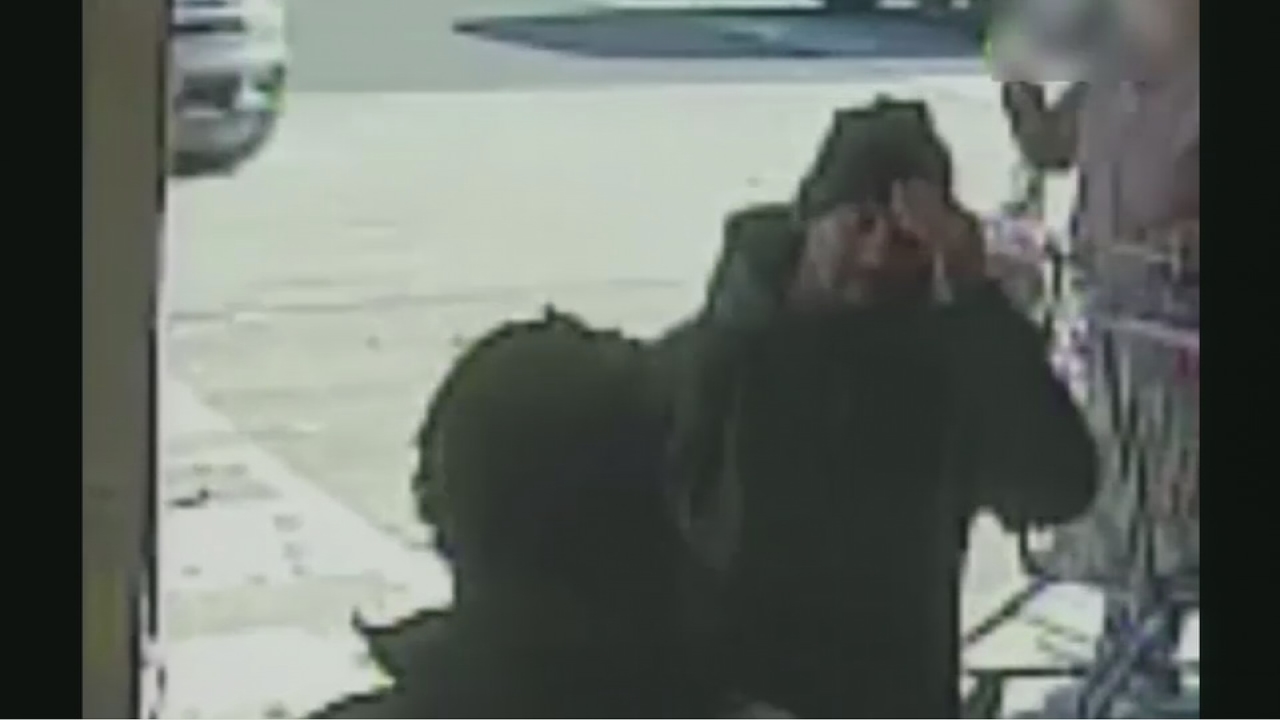 Police also released surveillance images from a Maryland ATM where her ATM card was used.

The images were taken at an ATM at a PNC Bank just off Interstate 95 in Aberdeen at 6:01 a.m. Monday morning.

See Photos of the Person of Interest 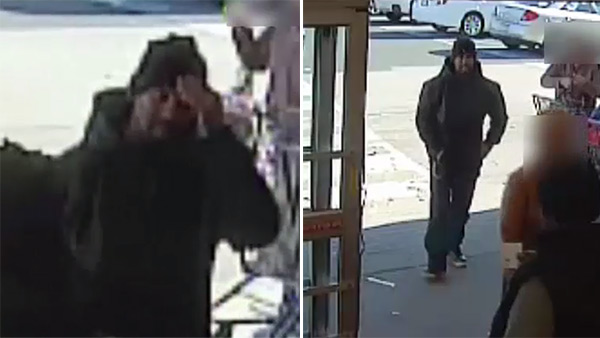 Another surveillance video showed the person of interest inside an Aberdeen, Maryland gas station mini-mart.