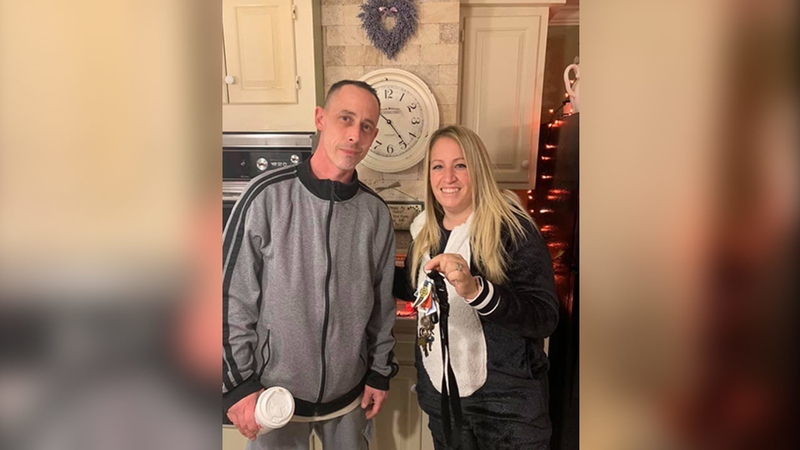 "He said, 'I'll drive them to you,'" Ridge resident Diana Chong said about Bagels 101 store manager Vincent Proscia. "No hesitation at all."

On Saturday morning, Chong quickly popped into the Middle Island bagel shop for coffee before getting on the road to Pennsylvania for a Friendsgiving. Her husband was driving their 2016 Kia Sedona, so she just hopped out of the car to go inside.

"I took my keys because I use the Bally Rewards," she said. "I come here every morning on my way to work. And then after that, I got my bagels. I went back in the car and we drove away."

They drove all the way from Middle Island to Honesdale, Pennsylvania -- 180 miles away -- and that's when she realized she'd left her keys behind.

"I'm just happy we made to our destination," Chong said. "Because if we would have stopped to let out the dog and shut off the car, we would have been stranded."

Proscia said Chong called the shop to let them know that she had left her keys there.

"I said I'll overnight them," Proscia said. "She called back and said that (I) can't overnight them and was like, 'I can't go to work on Monday.' I said I'll be right there. Send me the address, I'll come drop them off."

Overnighting the keys was not an option because there was no Sunday delivery, so the store manager took a road trip he would never forget, nor regret.

"It's just the right thing to do," Proscia said. "If it happened to my wife, I would want someone else to do it for her."

Chong was extremely thankful for his generosity and taking customer service to another level.

"It's the fact that he only knows me from coming in every morning," she said. "And he just, without hesitation came all the way. Drove three-and-a-half hours there, three-and-a-half hours back, got two hours sleep to go to work the next day. I can't ask for anything more."
Report a correction or typo
Related topics:
societysuffolk countymiddle islandridgehonesdalepennsylvaniau.s. & worldfeel good
TOP STORIES
Teen took action after child hurt in bonfire explosion: Officials
2 carjacking incidents at Del. Wawa stores; woman injured
Cause of death revealed for 23-year-old woman found dead after date
Another volatile day on Wall Street. Is it time to worry?
Omicron-specific COVID-19 vaccine starts clinical trials
Yandle cheered for 964th game, Flyers booed for losing 12th straight
US orders 8,500 troops on heightened alert amid Russia concerns
Show More
Officials ID victim killed in Montco crash; 4 others seriously injured
Son of Philly police officer shot, killed during apparent robbery
How a 73-year-old grandmother outwitted a scam artist
2 armed robberies investigated in Philly, victim shot
Dad charged and fired from job after racist tirade posted on TikTok
More TOP STORIES News