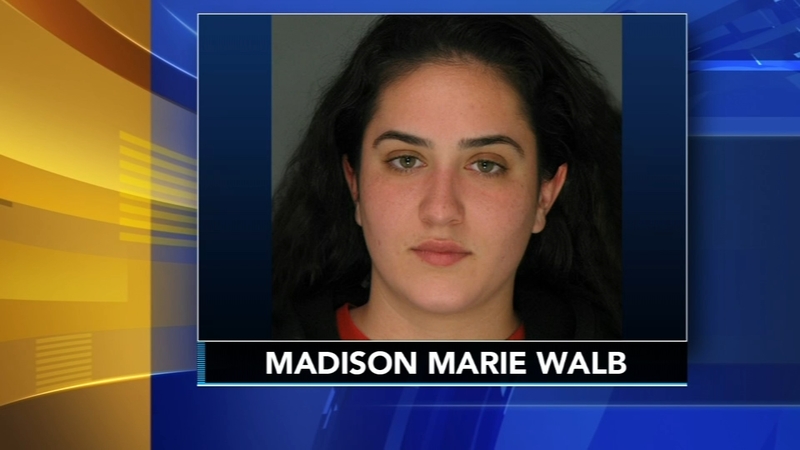 READING, Pa. (WPVI) -- A female suspect has been arrested on murder charges in the death of a woman whose body was found dumped in Berks County last year, while her brother and another man are accused of helping her conceal the crime.

Carmen Morales-Feliciano, 25, is charged with first-degree murder, third-degree murder, abuse of a corpse and other offenses in the death of 23-year-old Madison Walb.

Christopher Morales-Feliciano, 22, and Christian Carmona-Llanos, 26, are charged with abuse of a corpse, criminal conspiracy and other offenses.

The sibling suspects are in custody, the Berks County district attorney said, but Carmona-Llanos remains at large.

According to District Attorney John Adams, Walb could be seen on surveillance video entering a first-floor apartment in the 800 block of Penn Street in Reading shortly after 1 a.m. on October 6, 2017.

That's where Carmen Morales-Feliciano allegedly shot Walb in the head. A motive for the killing is not yet known, Adams said.

Around 1:45 a.m., the siblings were seen exiting the apartment, and at 2:37 a.m. Christopher Morales-Feliciano and Christian Carmona-Llanos enter the building, officials said.

The carpet was taken to an awaiting vehicle, and Carmen allegedly drove them to Lower Heidelberg to dispose of Walb's body.

Then, investigators say, Carmen Morales-Feliciano - who had been allegedly selling drugs before the murder - went back to the scene and continued to sell drugs.

Carmen and Christopher Morales-Feliciano are already in custody on unrelated charges, Adams said.

Anyone with information on the whereabouts of Christian Carmona-Llanos is asked to contact the Berks County District Attorney's Detective Unit at 610-478-7171 or Berks County Crime Alert at 877-373-9913.