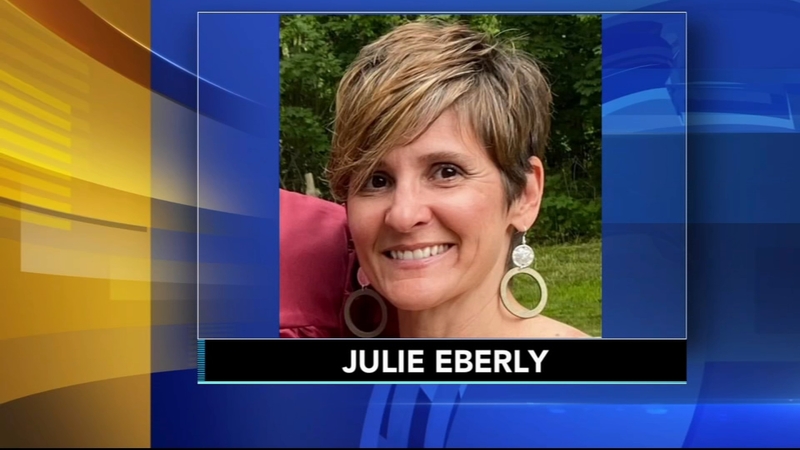 LUMBERTON, North Carolina (WPVI) -- A 29-year-old man was arrested Thursday in connection with the fatal shooting of a Pennsylvania mother of six while driving on Interstate 95 in Lumberton, North Carolina.

Julie Eberly, 47, of Lancaster County, was riding in the passenger seat with her husband on March 25. The couple was on their way to the beach to celebrate their wedding anniversary.

"I didn't see that he was going around me and I pushed him into the shoulder mistakenly. As soon as I was able, I gave him room to get back on the highway. No car contact, no nothing. I saw in my mirror that he was passing us to the right and gunshots were fired, our car was hit. My wife yelled my name. I asked if she was hit and she said, 'Yes,'" said Ryan Eberly.

Officials with the Robeson County Sheriff's Office announced Thursday that the driver of the car was Dejywan R. Floyd, 29.

Floyd was arrested just after midnight at an apartment in Lumberton.

He's charged with first-degree murder and discharging a weapon into an occupied property. He's being held in Robeson County Detention Center without bond.

"The arrest of Floyd is the direct result of law enforcement agencies and the community working together," Sheriff Bunis Wilkins said. "The surveillance footage provided to investigators by dozens of cooperating businesses and residents were critical elements in the tracking of Floyd's path in Cumberland County prior to the shooting and throughout Lumberton and beyond after the shooting. Regardless of the circumstances, no one deserved to be murdered while traveling our nation's highways."
Report a correction or typo
Related topics:
north carolinalancaster countyarrestmurderroad rage
Copyright © 2021 WPVI-TV. All Rights Reserved.
TOP STORIES
2 brothers to be charged with homicide after body found in Bucks County: DA
8 hurt after SEPTA bus crashes in Philadelphia
700-pound statue of George Floyd unveiled in New Jersey
Biden signs bill to make Juneteenth a federal holiday
Sheriff: Reports of plane crash off Long Beach Island "unfounded"
Supreme Court upholds Obamacare for 3rd time
Supreme Court sides with Catholic agency in same-sex foster care dispute
Show More
Police identify woman, officer involved in fatal Camden County crash
What 1 journalist learned from a half-million 6-word essays on race
Message in a bottle travels across Atlantic Ocean
Officer opens fire on gunman firing shots at intersection: Police
3 accused of carrying out mail fraud scheme in Philly region
More TOP STORIES News