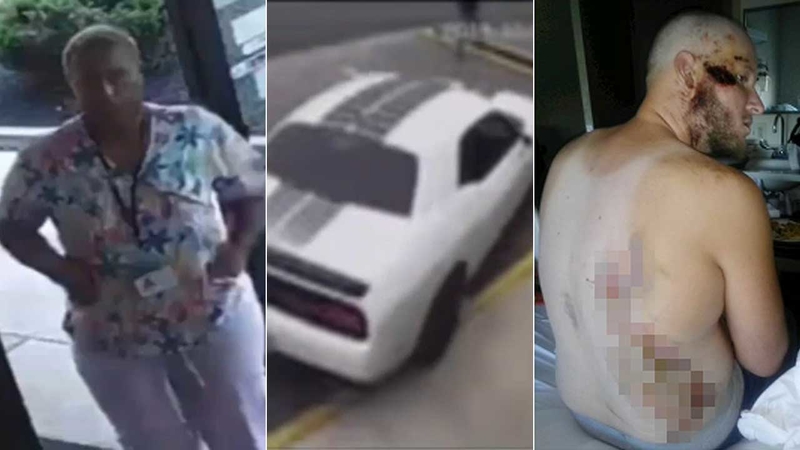 Police: Woman wanted after driving over man outside doughnut shop

PHILADELPHIA (WPVI) -- Police are asking the public's help in identifying a woman who drove into a group of people hanging out in front of Dunkin' Donuts following an argument in Northeast Philadelphia.

Surveillance video captured the moment when the woman accelerated right toward the group and plowed into a man in the group of friends, 29-year-old Vince McCreary.

Police released surveillance images Thursday of the woman they say was behind the wheel. She was wearing scrubs and a work ID when she entered the Dunkin' Donuts at Roosevelt Boulevard and Welsh Road around 10:30 a.m. on October 6th.

As she left the shop, police say the woman got into an argument with the group standing outside the front door.

"There was some words exchanged about them standing in front of the door of the store," Rosenbaum said.

Samantha Remer was there. She said the woman started making threats.

"I said, 'Please, you don't have to throw coffee in my husband's face,' and she started calling me all types of names," Remer said.

As the group walked away, police say, the woman got behind the wheel of a white Dodge Challenger with two black racing stripes and drove into McCreary, who suffered serious injuries.

Action News spoke to McCreary by phone from the hospital to get his side of the story.

"She came from behind us, flying up with her car. Tried to hit us all. I didn't see her coming and she hit me," McCreary said. "I thought I was going to die."

Police spotted and impounded the car, which was being driven by a man, in Center City later the same day.

So far, the car owner has refused to identify the woman, who is now wanted for aggravated assault.

"So, we're looking for the public to step up and give us a little help in identifying this female," Rosenbaum said.

Police say the owner of the car could face charges for interfering with the investigation and refusing to identify the woman driving his car.

Anyone with information is asked to call 911.