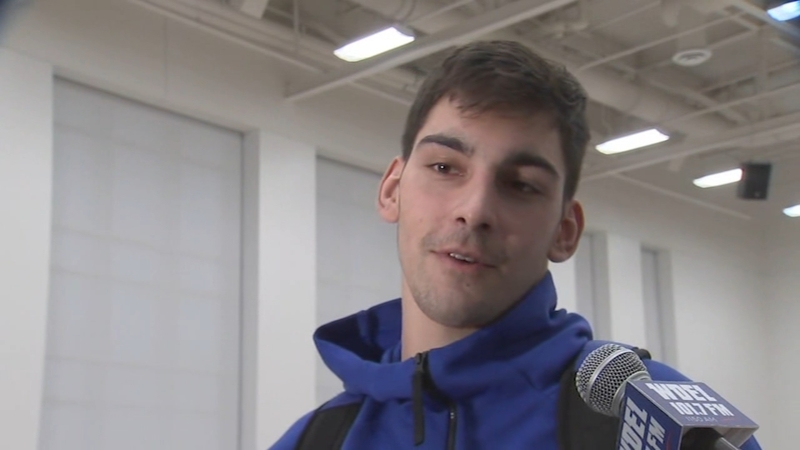 From Wildcat to Blue Hen, Dylan Painter is ready to dance

WILMINGTON, Delaware (WPVI) -- There are many connections between Villanova and the University of Delaware that will be examined before Friday afternoon's game, but one Blue Hen's story could take the focus away from all the others.

Delaware forward Dylan Painter started his college career at Villanova. But now he is looking to help the No. 15 Blue Hens get their first-ever win in the NCAA Tournament. To do so, they have to take down the second-seeded Wildcats.

It's UDel's first trip to the Big Dance since 2014, but Painter has been here before.

In his two and half years at Nova, he played in the tourney twice and won a National Championship.

But Painter, a health behavior science major, decided to transfer to Delaware.

"I felt like I've had two very good college basketball careers, over there and over here, so it's going to be exciting," Painter said.

The Hershey, Pa. native said watching and waiting for Delaware, the CAA champions, to be selected for March Madness felt different than when he was a Wildcat.

"This definitely felt a lot different than it felt back there. Usually, we were called like one of the first because I think we were first overall seeds both years," Painter said. "But this definitely felt better. Because this team worked for this and I feel like we've earned this. To be like a major contributor for a team that's going to the tournament is a great feeling."

Painter said his phone was going off with texts so he hadn't gotten to moment to see if any of his former Villanova teammates had contacted him after the announcement was made.

Wright said he sends his former player messages if he sees he had a good game. Wright says Painter also reaches out from time to time.

"We're really proud of him. Not excited about playing him, honestly, he's gotten to be a really good player which we knew he would," Wright said.

Wright explained that Painter didn't leave the Nova program disgruntled. Wright said it was just a matter of Painter wanting to play more right away and getting that opportunity elsewhere.

Wright said Painter understood everything Villanova was about.

"We loved him and we stayed in touch. He knows what we can do and he can explain it. He's very intelligent," Wright said.

Wright said that is very concerning to him to play someone like Painter who knows what he knows, but that's what the Big East champions will have to do.

His father played at the school. His two brothers and sister attended Villanova.

Ingelsby said he has great respect for Villanova and Jay Wright, and it will be an honor to play them on Friday. Just don't look for his family cheering on the Wildcats.

"I have a lot of friends and family who went to Villanova, supportive of their program, but I think they'll be sitting on our side Friday," Ingelsby said.

Painter meanwhile is coming to grips with facing his former team.

"I was like 'no way this happens, no way the stars align like this.' And then when we got that call up, my whole body is just like, 'wow, I can't believe this.' So it'll be good to have all of Delaware come out and support us. I know it's a big football rivalry. We'll make it a big basketball rivalry," Painter said.