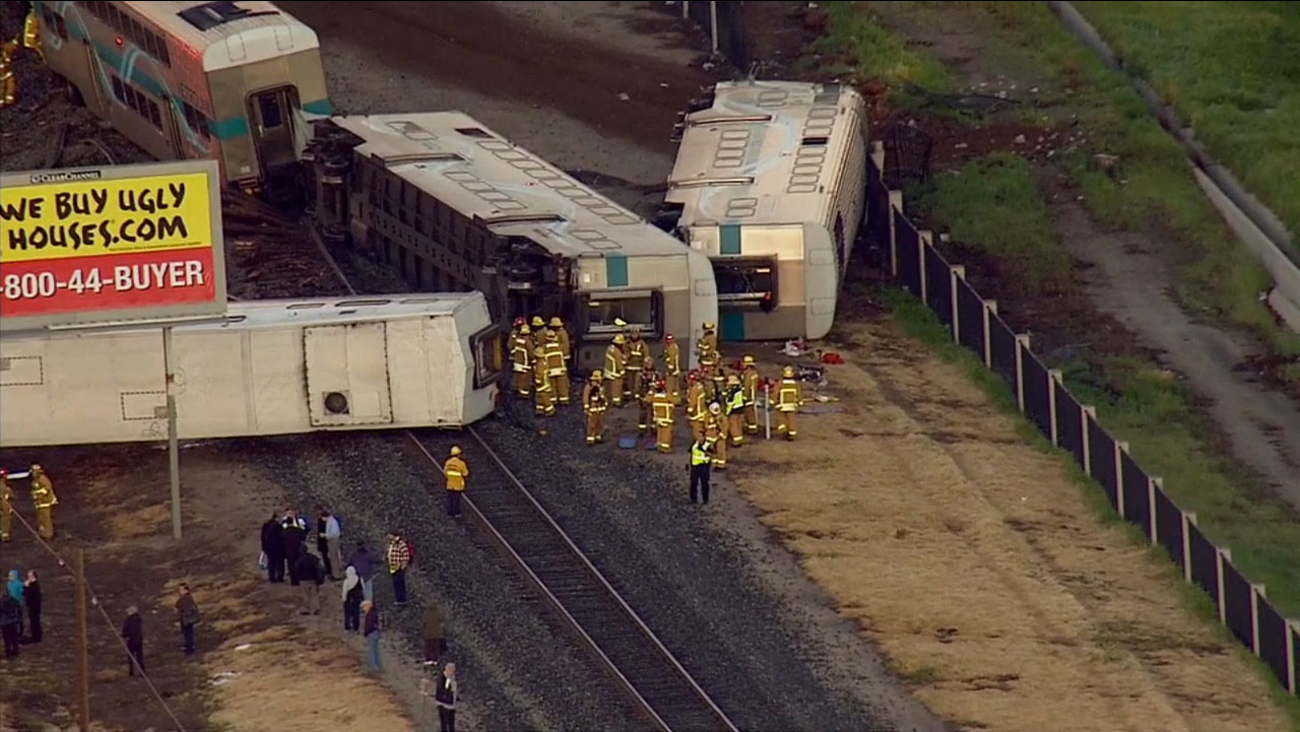 OXNARD, Calif. -- A commuter train crashed into a truck and derailed Tuesday, injuring dozens of people in farmland northwest of Los Angeles.

The collision sent three cars of the Metrolink train tumbling onto their sides. A total of 28 passengers were taken to hospitals, four with critical injuries, according to the Oxnard Fire Department.

Authorities were questioning the truck driver, whom they said fled and was found several miles away. For reason that are not yet clear, his truck was sitting on the tracks at a marked crossing around 5:44 a.m. as the train approached, fire officials said.

A Metrolink train on the way to Los Angeles struck a vehicle on the tracks in Oxnard on Tuesday, Feb. 24, 2015.

Little was left of the truck except scorched and mangled wreckage, with some debris in a nearby intersection and some close to the tracks.

The train carrying 51 passengers was heading from Ventura County to Los Angeles. The stretch of track 65 miles from Los Angeles where the collision occurred was straight, and that allowed the conductor to see the truck on the tracks and begin braking, fire officials said. The speed limit in the area for trains was 79 mph.

The National Transportation Safety Board and the Federal Railroad Administration were sending investigators.

Television news helicopters showed several fire trucks surrounding the tracks running parallel to a road and a field. One toppled car laid with one end on the tracks and another on the street.

The locomotive, which was pushing the train from the back, was upright.

VC Line 104 is canceled at Oxnard due to the incident with 102. All Passengers will transfer to train 106. Updates to follow.

Metrolink trains have been involved in two major disasters in the past decade, among other accidents.

Twenty-five people were killed on Sept. 12, 2008, when a Metrolink commuter train struck a Union Pacific freight train head-on in the San Fernando Valley community of Chatsworth. More than 100 people were hurt in one of the worst railroad accidents in U.S. history.

Federal investigators later concluded that the Metrolink engineer had been texting moments before the crash and ran a red light.

In 2005, 11 people were killed and about 180 were injured when a man who later claimed he was suicidal parked his SUV on tracks in suburban Glendale and fled before an oncoming Metrolink train struck it and derailed, hitting a second Metrolink train.